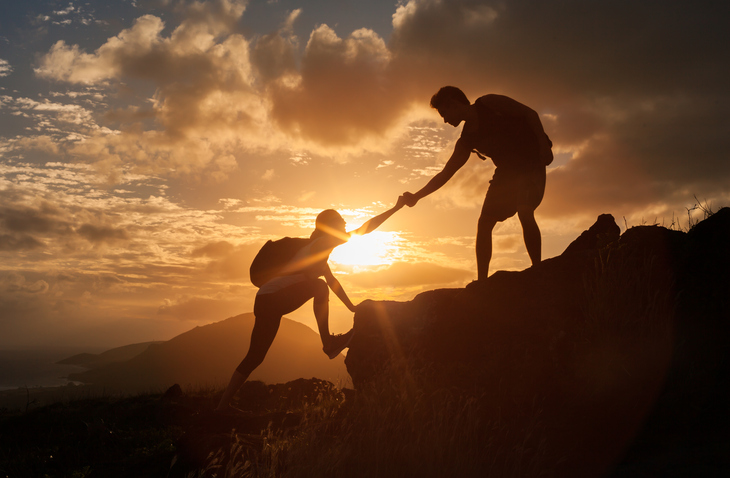 A mount is, as you might have heard, a mountain. As a verb, to mount means ‘to climb or go up,’ ‘to get up on something,’ like a platform or a horse, or ‘to put something in a high position.’ It also means ‘to organize or put in place’ and, when talking about an attack, ‘to organize and launch.’ In show business, it means ‘to prepare for production.’ If an animal mounts another animal, it means that it climbs on it to have sexual intercourse.

The word mount is often used as part of the name of a mountain. Mount Everest is, of course, a very famous example, but also famous because of its cultural importance in the US is Mount Rushmore, which features sculptures of the heads of four US presidents carved into it. Mount Rushmore has appeared in a number of movies, works of fiction, cartoons, TV shows, and video games, among other things. You can see a clip from the dramatic ending of Hitchcock’s North by Northwest, in which the hero and heroine are chased down Mount Rushmore, here:

Mount Everest is famous for being the world’s tallest mountain, but it seems that it may not be. Although it is the highest above sea level, there are other ways of measuring mountain height, one of which shows that another mountain is significantly taller. You can read more in this article.

Mount, meaning ‘mountain,’ dates back to the mid-13th century. It came into English from the Anglo-French mount (and the Old French munt), meaning ‘mountain.’ Both the older English word mountain (which also came into English from the French, but around the year 1200) and mount can be traced back to the Latin noun mons, and the Proto-Indo-European root men– (to stand out or project). It’s related to the Spanish montaña, the Italian montagna, and other Romance language words for ‘mountain,’ as well as the Latin eminere (to stand out), the English eminence, the Sanskrit manya (nape of the neck), the Old Irish muin (neck), and the Welsh nouns mwnwgl (neck), mwng (mane) and mynydd (mountain). The verb, dates back to around the year 1300. The verb mount, which originally just meant ‘to mount a horse,’ also came into English from the French, but in this case, it was the Old French verb monter (to go up, ascend, climb or mount). The verb can be traced back to the Vulgar Latin verb montare, which also comes from the Latin noun mons. The meaning ‘to set in place or position’ dates back to the mid-16th century. The noun mount, meaning ‘that on which something is mounted’ comes from the verb, and dates back to the mid-18th century.

See full definition
Learn more about mount in our forums

Mount in other languages