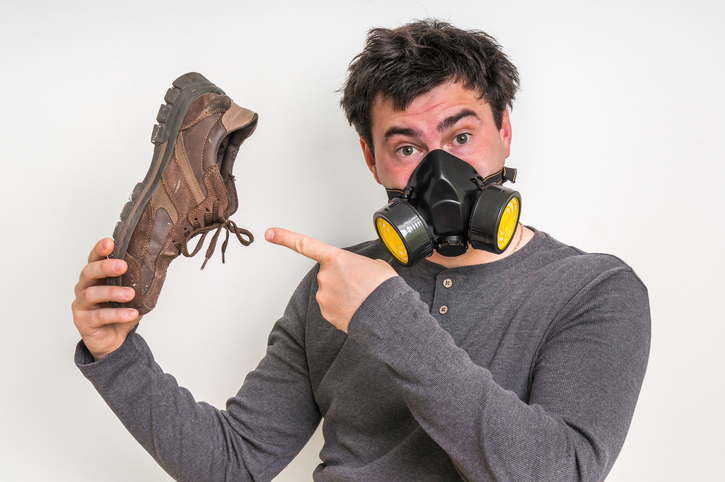 If something smells very strongly and unpleasantly, we say that it reeks. People can reek too, usually when they’re covered in sweat. Figuratively, reek means ‘to give off or exude.’ As a noun, a reek is a strong unpleasant smell or, figuratively, a suggestion of something, usually something unpleasant.

Listen out for the lyric: “I’m stepping out, my dear, to breathe an atmosphere that simply reeks with class.”

A reek can also be a vapor or steam, but this sense is now rare. You might come across it in old books though or encounter it still in some parts of Scotland.

In Irish English, usually in the plural, reeks are hills or mountains. Macgillycuddy’s Reeks is a mountain range in County Kerry, in the Republic of Ireland. You can see some of the landscapes in this video clip:

Reek dates back to before the year 900. The Old English noun rēc or riēc, which later became rek(e) in Middle English, originally meant ‘smoke.’ Meanwhile, the verb reek also dates back to the year 900, as the Old English rēocan or rēcan (later the Middle English reken), which originally meant ‘to smoke or steam.’ There is no way to know which came first. They probably came into English from a Scandinavian source, though they can be traced back to the Proto-Germanic noun raukiz (smoke) and reukan (to smoke), and the Proto-Indo-European root reug– (‘to vomit or belch,’ as well as ‘smoke or cloud’). They are related to the Old Norse reykr, the Danish rǿg, the Swedish rök, the Old Frisian rek and reka, the Middle Dutch rooc, the Old High German rouh and the German Rauch (all meaning ‘smoke or steam’), as well as the Middle Dutch roken and the Dutch rieken (to smoke), the Old High German riohhan (to smoke or steam), and the German verbs rauchen (to smoke) and riechen (to smell). The name of the capital of Iceland, Reykyavik, is also related; it means ‘bay of smoke.’ The verb sense ‘to be heated and perspiring’ dates back to the 15th century, and gave way to the noun sense of ‘something that rises,’ which evolved into ‘stench’ in the mid-17th century. The verb sense for stench dates back to the early 18th century.

See full definition
Learn more about reek in our forums

Reek in other languages