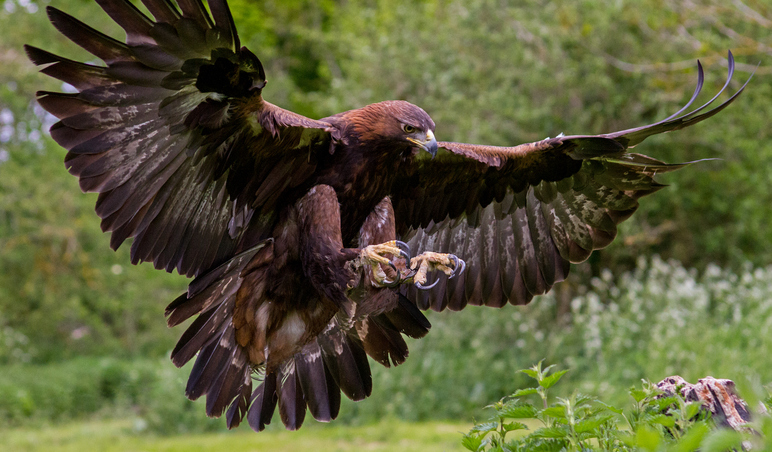 Prey, which is an uncountable noun, is an animal or animals hunted for food by other meat-eating animals. A thing or person that is victim to an enemy, affliction, or disease is also prey. As a verb, to prey, always followed by on or upon, means ‘to hunt animals for food,’ ‘to attack in order to destroy or steal,’ or ‘to trouble or be a harmful influence.’ To take dishonest advantage of another is also to prey.

fall prey to something: be a victim of. Example: “The new business fell prey to the recession and failed in its first year.”

of prey: said about a bird or animal that preys on other animals or birds. It is most often used either as bird of prey or beast of prey. Example: “The hawk is a bird of prey.”

You can listen to Fatboy Slim’s 2000 song “Sunset (Bird of Prey)” and watch the video here:

The song samples vocals from a Doors’ song called “Bird of Prey.”

Birds of prey are birds with very good eyesight, which helps them to spot food, such as small mammals on the ground, from high in the sky. They also have long, strong claws and sharp, curved beaks. Birds of prey include birds like hawks, vultures, falcons, eagles, and owls. This video tells you how to identify some of the more commonly seen birds of prey:

Don’t confuse prey with pray. They are pronounced the same, but to pray means ‘to offer praise’ to or ‘to petition God.’

Prey dates back to the early 13th century, as the Middle English noun preye, which originally meant ‘an animal hunted for food,’ as well as ‘something taken in a battle or raid.’ It came into English from the Old French preie (‘animal taken in hunt’ or ‘booty’), and it can be traced back to the Late Latin praeda (booty, plunder or hunted animal) and the earlier Latin paeheda, which literally meant ‘something seized before.’ Its origin can be found in the Proto-Indo-European prei-heda, from the roots per- (forward, in front of or before) and ghend– (to seize or take). It is related to the French proie, the Spanish preza and the Italian preda, all meaning ‘prey’ (along with many other Romance-language equivalents), as well as English words such as prehensile, apprehend, comprehend, among others, and similar words of Latin origins in other languages. The verb dates back to the late 13th century. Originally meaning ‘to plunder, pillage or ravage,’ it comes from the noun, but was also influenced by the Old French verb preer or preder. The sense ‘to kill and devour’ appeared in the mid-14th century, while its figurative senses became common in the 15th and 16th centuries.

See full definition
Learn more about prey in our forums

Prey in other languages