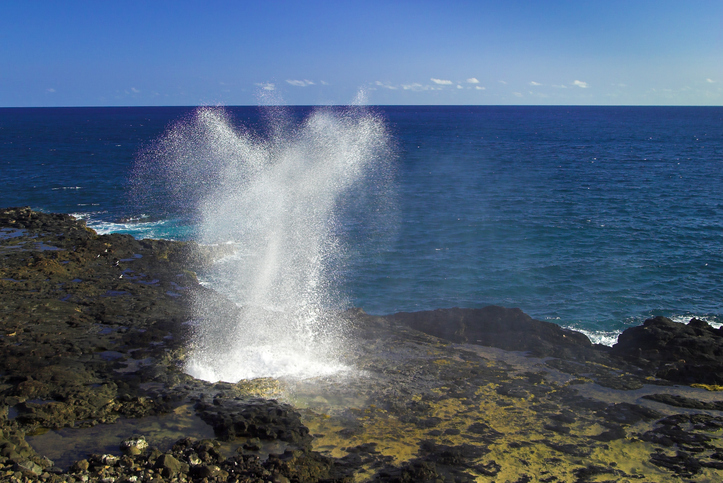 To spout means ‘to throw out with force, as in a stream or jet’ or ‘to shoot out with violence.’ Figuratively, if you say something in a showy and pompous and oratorical manner, you’re also spouting. As a noun, a spout is a pipe, tube, or projecting lip used to pour out or to carry liquid along. A continuous stream of liquid coming out of something is also a spout. Spout is also a downpour of something, especially water, coming from a high place.

up the spout (UK, informal): ruined. Example: “Since the financial crisis, any hope of the business succeeding is right up the spout.” As a slang term in UK English, up the spout also means ‘pregnant.’ Example: “I hear Jane’s up the spout again; is that five kids now?” Be careful though—this term is quite vulgar and likely to cause offense.

“Itsy Bitsy Spider” is a children’s song about a spider who tries to climb up a waterspout, but keeps getting washed back down by the rain. You can listen to the song and read the lyrics here:

Historically, spout was the word used for a shaft with a lift in it that took pawned goods up from a pawnshop, at street level, to the storage rooms on the floors above. By extension, the word was used to refer to the pawnshop itself. Although spout is no longer used in this way, it is from this that we got the expression “up the spout,” in the sense of ruined, as when people were unable to find money any other way, they would take their goods to the pawnshop and watch them go up the spout.

Spout dates back to the early 14th century. The Middle English verb spouten, meaning ‘to shoot out or be shot out with force’ (said about liquids), came into English from a Germanic source, though linguists are unsure which. It can be traced back through the Proto-Germanic root sput– to the Proto-Indo-European root sp(y)eu-, meaning ‘to spew or spit.’ It is related to the Middle Dutch spoiten (to spout), the Dutch spuiten (to flow or spout), the North Frisian spütji (to spout or squirt) and the Swedish sputa (to spout), as well as the Old Saxon spiwan, the Old Norse spyja, the Old Frisian spiwa, the Middle Dutch spijen, the Dutch spuwen, the Old High German spiwan, the German speien and the Gothic spiewan (all meaning ‘to spit’) and the English words spew and spit. The figurative sense related to talking first appeared in the early 17th century. The noun comes from the verb, and dates back to the late 14th century.

See full definition
Learn more about spout in our forums

Spout in other languages