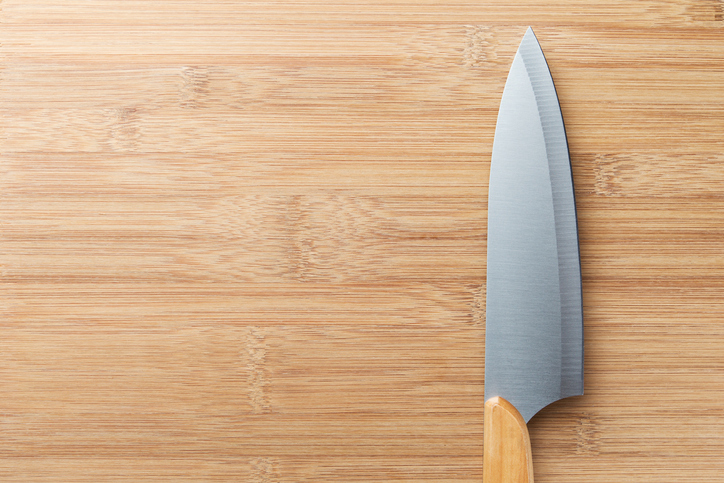 The blade is the flat cutting part of a sharp tool or weapon like a knife or a sword and it can actually be used as a synonym for sword too. Part of any mechanism that resembles this and that is used for wiping or scraping is also a blade and, generally, any thin and flat part of something too. In botany, a blade is the leaf of a plant, especially grass or cereal plants, and in sports, the blade is the metal part of an ice skate. Blade is also an informal word for a lively and spirited young man, although this meaning is now dated.

Ridley Scott’s movie Blade Runner is considered a classic of dystopian science fiction. You can see a trailer for the final cut version of the movie here:

(There are three available versions of the movie, the US theatrical release [studio cut] from 1982, the director’s cut from 1991, and the final cut from 2007). The film is based on a Philip K. Dick novel entitled Do Androids Dream of Electric Sheep. However, the title is from a completely different book by William S. Burroughs. When working on the script, Scott was dissatisfied with calling the main character, Deckard, a detective, as he felt the title did not reflect the reality of the job, which was to track down and kill rogue androids. Another member of the team found the book by Burroughs and suggested that a blade runner would be a good job title for Deckard’s character. Scott agreed and they bought the rights to Burroughs’ title, which then became the title of the movie as well as the main character’s job. A sequel to the movie has recently been released, called Blade Runner 2049,

The protruding bones on your upper back are called your shoulder blades.

Blades, or running blades, is also the name given to special prostheses for amputees that allow them to run fast and compete in athletics. In this video clip, you can see Lian Malone, a member of New Zealand’s Paralympic team, talking about his blades and running on them:

Blade dates back to before the year 1000. The Old and Middle English blæd originally meant ‘a leaf,’ but it soon came to be used figuratively for the leaf-like parts of different instruments and weapons, such as spears or oars. It can be traced back to the Proto-Germanic bladaz and the Proto-Indo-European bhle-to, which is the past participle form of the root bhel- (to thrive or bloom). It is related to the Old Frisian bled and the German Blatt (both meaning ‘leaf’), and the Old Saxon, Danish and Dutch blad and Old Norse blað (all meaning ‘blade’). It is more distantly related to the English words bleach, bleak, blaze, blend, blush, bloom, blood, blow, flower and flourish, among many others. The meaning extended to the broad, flat bone of the shoulder around the year 1300, and the cutting parts of knives and swords in the early 14th century. As for blades of grasses, it’s likely that this sense was lost, replaced by leaf, and then brought back in Middle English, through French influence, for the leaves of grasses. Some linguists think that in Old English, there was a difference between blæd (blade) and leaf, which also existed at the time, just like there was in Old Norse: blæd would be used for grasses, herbs and small plants, while leaf was only for those on trees.

See full definition
Learn more about blade in our forums

Blade in other languages