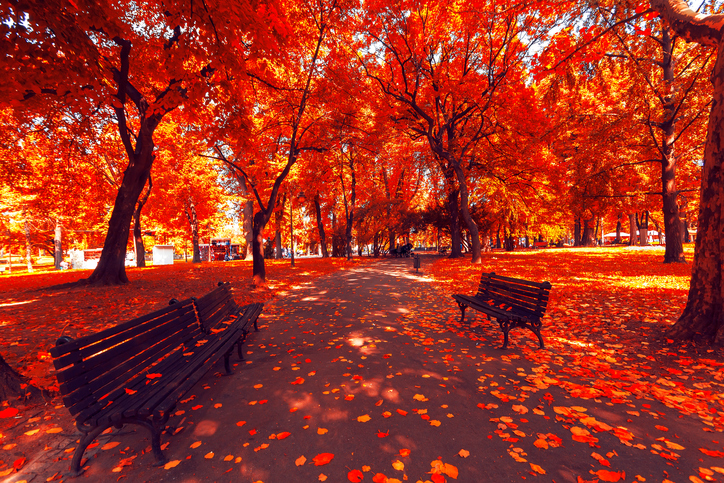 Temperatures are often mild in the fall.

Mild means ‘gentle or soft’ and it can refer to feelings or manners. It can also mean ‘not severe, temperate’ or ‘moderate in strength, force, or degree’. When we use it to talk about food, it means ‘not sharp in taste or smell’ and, when we are talking about disease, it means ‘not serious.’

You can listen to Mild High Club’s song “Windowpane”, from their 2015 album Timeline here:

In UK English, as a noun, mild is a type of beer with a blander taste than bitter.

Whether someone considers a food mild or not is, of course, a question of personal taste. This is particularly true when it comes to spicy foods. People who are unused to spices may find food that others consider mild just too hot (spicy) for them. Here’s a short video telling you why some people get to like spicy food and what you should eat or drink to temper the pain if that mild curry turns out not to be so mild after all!

Mild dates back to before the year 900. The Old and Middle English adjective milde, originally meaning ‘gentle’ or ‘merciful’ can be traced back to the Proto-Germanic adjectival prefix milthjaz– and the Proto-Indo-European meldh-, from the PIE root mel-, meaning ‘soft.’ It is related to the Old Norse mildr, the Old Saxon mildi, the Old Frisian milde, the Middle Dutch milde, the Dutch mild, the Old High German milti and the German milde, all meaning ‘mild,’ and the Gothic mildiþa, meaning ‘kindness.’ It is more distantly related to the English words bland, enamel, malt and melt, among others. The word was originally used to refer to people or powers, but by the year 1400, it had expanded to be used to describe the weather, and it has been used to describe diseases since the mid-18th century, and flavors since the late 18th century. In Old English, it could also be used as an adverb, but now we use mildly to that effect.

See full definition
Learn more about mild in our forums

Mild in other languages