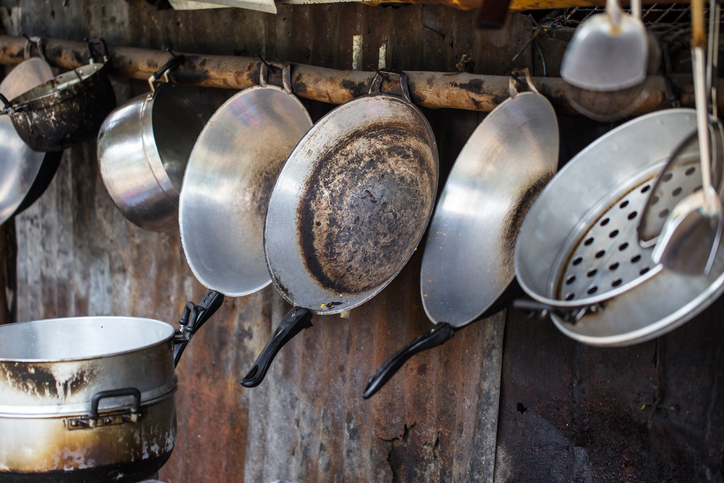 It looks like these pots and pans could do with some attention from a tinker.

Mainly historical now, as the trade has died out, a tinker is a person who fixes pots and pans and wanders from place to place looking for customers or, in US English, a person skilled in many minor kinds of work, especially mechanical or manual work. It also means ‘a clumsy or unskillfull worker.’ In Scottish and Irish English, it is the standard word for a Romany and also means ‘wanderer’ or ‘beggar.’ These meanings have now become common in most varieties of UK English, but the term, in this sense, is usually considered to be offensive these days. As a verb, to tinker means ‘to work on something without visible or useful results’ or ‘to work clumsily and unskillfully at something.’

In J. M. Barrie’s novel, Peter Pan, Peter’s fairy friend Tinker Bell is a tinker of the fairy folk, in that she mends pots and pans. Her name also refers to the fact that her speech sounds like the tinkling of a bell (as tinker and tinkle sound similar) to anyone who doesn’t speak the fairy language. You can see Tinker Bell in this clip from the 1953 Disney movie adaptation of the story:

Tinker is also sometimes used in the UK as a term for a mischievous child.

Tinkerbirds are any of a number of African birds whose call sounds like the repeated striking of a hammer on metal. You can hear a tinkerbird’s call in this video clip:

Tinker dates back to the mid-13th century, in the form of the Middle English tinkere. It is a shortened form of the noun tinkerere, which literally meant ‘worker in tin.’ As such, it can be traced back to the English noun tin, which has been in use since before the year 900. It can be traced back to the Proto-Germanic noun tinom, though its origin before that is unknown. It is related to the Middle Dutch and Dutch tin, the Old High German zin, the German Zinn and the Old Norse tin (all meaning ‘tin’); there are no related words outside of Germanic languages. The –er ending is common in Germanic languages to form names of professions. The oldest examples found of tinker were last names, and it only became more common as a noun in the late 14th century, though of course its use in last names means it was already a name for the job they did. The verb comes from the noun and, meaning ‘to work as a tinker,’ dates back to the late 16th century. The sense expanded to ‘to work unskillfully or clumsily at something’ and ‘to keep busy in useless ways’ in the mid-17th century.

See full definition
Learn more about tinker in our forums

Tinker in other languages

Intermediate+ Word of the Day: rat