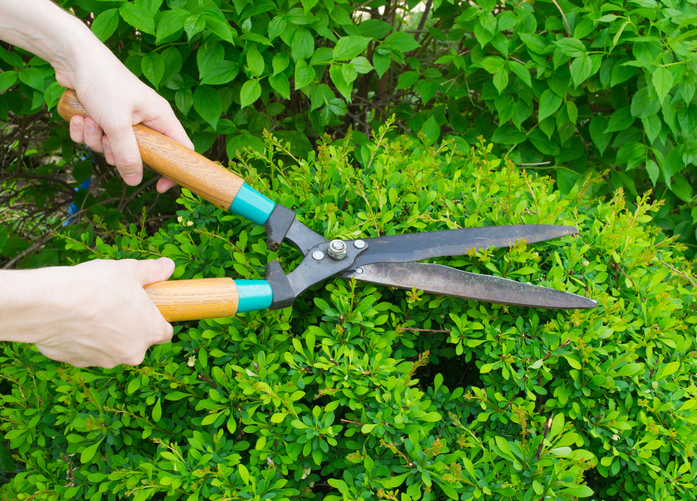 To shear means ‘to remove hair or wool from an animal by cutting’ or ‘to cut through something with a sharp instrument.’ It also means ‘to progress as by cutting,’ often with the preposition through, and, usually followed by off, ‘to break as the result of pressure.’ Followed by of, it means ‘to deprive or strip.’ As a noun, shears, usually in the plural, are scissors of a large size or any of various cutting implements or machines with two blades that resemble scissors.

The most common animals to be sheared are sheep and sheep shearing has even become a competitive activity, with records for the most sheep sheared within a time limit and the fastest time for shearing one sheep. The current record holder for the fastest time to shear one sheep is Ivan Scott from Ireland, who sheared a sheep in 37.9 seconds in 2010. You can see him do it in this video clip:

Shear (the noun) can also be used as a unit of measurement for the age of sheep.

Don’t confuse it with sheer. They sound the same, but sheer is an adjective meaning ‘very steep,’ ‘almost transparent,’ or ‘complete, total.’

Shear dates back to before the year 900. The Old English verb sceran (pronounced sheran) or scieran (pronounced sheeran), and later the Middle English sheren, originally meant ‘to cleave, hew or cut with a sharp instrument,’ as well as ‘to cut hair’ or ‘to shear sheep.’ It can be traced back to the Proto-Germanic verb skero and the Proto-Indo-European root sker– (to cut). It is related to the Old Norse skera, the Old Frisian skera, and the Dutch and German scheren (all meaning ‘to shear’), as well as a lot of other English words, such as scar, scrap, scrape, score, share, shard, shore, shrub, skirt, shirt and cut. The noun comes from the verb, and dates back to the early 17th century. It originally meant ‘the act of shearing,’ though shears, meaning ‘instrument to shear,’ came along soon after.

See full definition
Learn more about shear in our forums

Shear in other languages