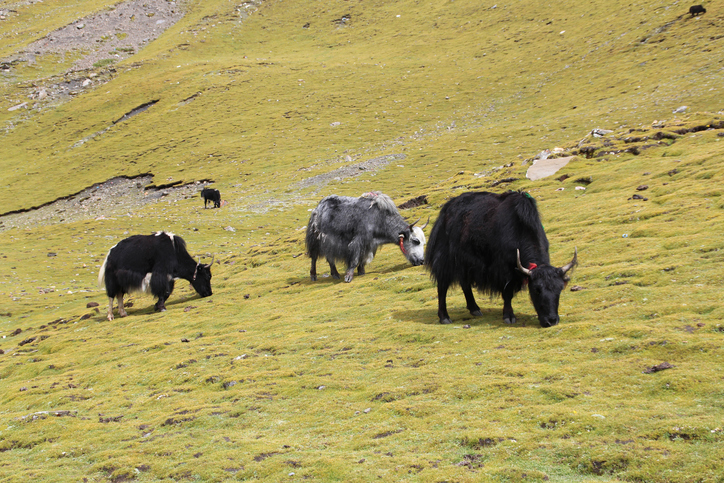 A yak is a large, shaggy-haired ox with curved horns found in the Tibetan highlands. Nowadays, wild yaks are considered vulnerable, while domestic yaks are more common. Unrelatedly, yak (sometimes spelled yack) is a slang verb that means ‘to talk idly and without stopping, to chatter.’ As a noun (also sometimes spelled yack and also sometimes in the form yakety-yak), it means ‘constant chatter or gossipy talk.’

You can listen to The Coasters’ 1958 song “Yakety Yak” here:

Yak racing is a popular spectator sport in Tibet and is often a part of Tibetan festivals. You can see a yak race in this video clip:

Yak, meaning ‘wild ox of Central Asia,’ dates back to the late 18th century. It came into English from the French, but of course originated in the Tibetan g-yag or gyag, meaning ‘male yak.’ The slang verb yak or yack, meaning ‘to chatter idly,’ dates back to the 1930s, though the original US slang meant to laugh. It only started being used as a slang word for talk in the 1950s. It is probably a shortened form of yakety-yaking, and linguists believe its origin is an imitation of the sound of laughter and chatter. The noun comes from the verb, and appeared soon after the verb.

See full definition
Learn more about yak in our forums

Yak in other languages