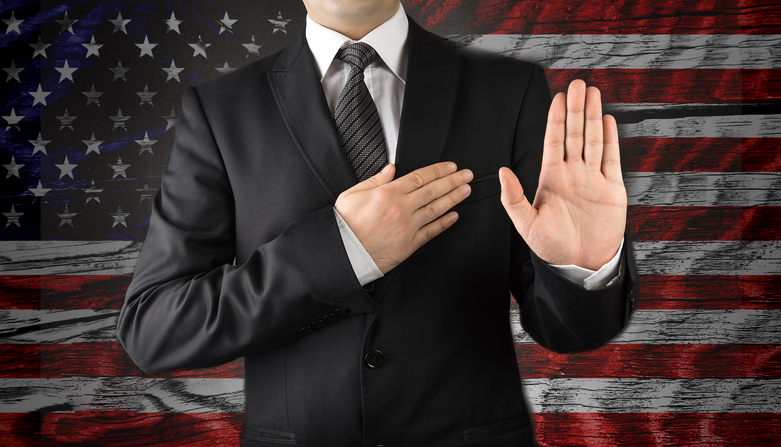 A pledge is promise to do or to stop doing something. It is also something that you leave with someone, as proof that you will pay them back a debt or that you’ll keep a promise, as well as anything given as proof of love or friendship. In US English, a person accepted into a club but not formally initiated is also a pledge. This use is most common in college sororities and fraternities. As a verb, to pledge means ‘to promise’ or ‘to bind someone by or as if by a pledge.’

take the pledge: to give up alcohol. Example: “I’ll just have a lemonade, thanks. I’ve taken the pledge.”

You may have heard of the Pledge of Allegiance in the United States. The Pledge is a way for Americans to declare loyalty to their country and is recited at the opening of Congressional sessions and some other government meetings. It is also frequently recited by children in school. This video clip explains a little bit more about the Pledge of Allegiance:

Pledge and promise are largely interchangeable in most senses, but a pledge is generally considered to be more solemn. Pledge is also much more usual as a term for something given as proof that you will pay a debt, keep a promise, or proof of love or friendship.

Pledge dates back to the late 13th or early 14th century. The Middle English noun plege, which originally meant ‘surety or bail,’ came into English from the Anglo-French (and Old French) plege, where it could mean ‘security or bail,’ as well as ‘hostage.’ It can be traced back to the Frankish verb plegan (to guarantee), and the West Germanic root, pleg-, which meant ‘to have responsibility for something,’ from the Proto-Indo-European root dlegh- (‘to engage yourself,’ or ‘to be or become fixed’). It is related to the French pleige (pledge), as well as the Old Saxon plegan (to vouch for), the Middle Dutch plien (to answer for or guarantee), the Old High German pflegan and German pflegen (to care for), and the Old English plēon to risk or expose to danger). It shares its PIE origin with the English words play, plight and indulge, among others. The meaning ‘a vow of allegiance’ (usually made by drinking together) appeared in the early 17th century, and expanded to ‘a solemn promise’ in the early 18th century, though both these meanings existed in the verb centuries before. The pledge, meaning ‘a vow to give up alcohol,’ is from the mid-19th century, while a pledge as slang for someone who intends to join a fraternity, sorority or other club first appeared on American colleges around the year 1900. The verb comes from the noun, though it was also influenced by the Old French verb plegier. Meaning ‘to promise,’ ‘to give as security for repayment’ or ‘to promise to be faithful to someone,’ it dates back to around the year 1400. The senses ‘to be responsible for,’ ‘to stand surety for,’ and ‘to mortgage’ appeared in the 15th century, while ‘to put someone under oath’ and ‘to solemnly promise or guarantee’ date back to the 16th century. Since the late 16th century, to pledge has also been used figuratively to mean ‘to drink a toast with someone,’ a bit of a contradiction considering one of the meanings of the noun.

See full definition
Learn more about pledge in our forums

Pledge in other languages