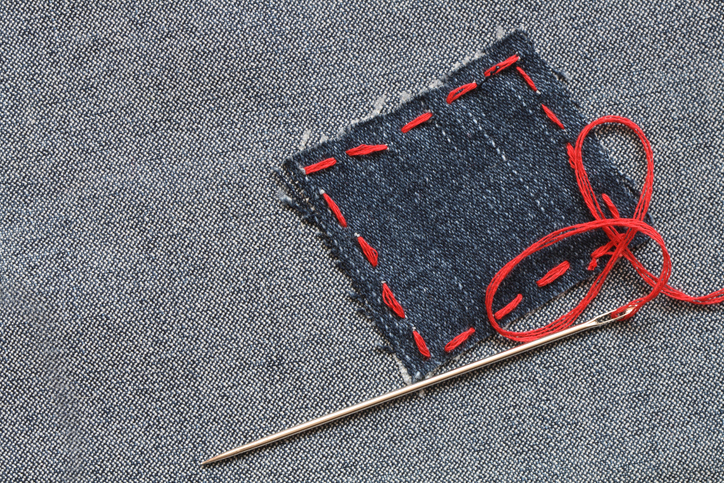 A stitch is the movement of a threaded needle through a fabric that leaves one single loop of thread, as done when sewing. The loop of thread left is also a stitch. Informally, the slightest piece of fabric or of clothing can also be called stitch and, less commonly, so can the least bit of work. A sharp pain in the side of the body, like you get sometimes when you’ve been running, is also a stitch. As a verb, to stitch means ‘to mend, fasten, or sew with stitches.’

in stitches: laughing very hard. Example: “Joanna’s anecdotes are always so funny that she has everyone in stitches.”

Lilo and Stitch is a 2002 animated movie about a girl who adopts an extraterrestrial that she thinks is a dog and names it Stitch. You can see the movie trailer here:

As well as being what is used to fix pieces of fabric together to make clothing, stitch is also the verb used for sewing together the edges of a wound to help it heal and the noun used for a single movement of a surgical needle or the loop of thread it leaves in the skin. A more formal word for a medical stitch is suture.

Stitch dates back to before the year 900. The Old English noun stice (pronounced “stiche”), and later the Middle English verb stiche, originally meant ‘a thrust’ or ‘a stab.’ It can be traced back to the Proto-Germanic stikiz and the Proto-Indo-European compound stig-i-, from the root steig-, which could mean ‘to stick’ or ‘pointed.’ It is related to the Old Frisian steke, the Old High German stih and the German Stich, all meaning ‘a pricking’ or ‘a prick, sting or stab,’ as well as the Old Saxon stekan, the Old Frisian steka, the Dutch stecken, the Old High German stehhan and the German stechen (all verbs meaning ‘to stab or prick’); the Old Norse stik, the Middle Dutch stecke and stec, the Old High German stehho and the German Stecken (all nouns meaning ‘stick or staff’); and of course the English verb and noun stick. The sense ‘a sudden stabbing pain in the side’ has been used since Old English, and was originally a figurative use of the main meaning. The senses related to sewing (and shoemaking) date back to the late 13th century, and have since then overtaken the original meaning. The figurative sense ‘a bit of clothing’ first appeared around the year 1500, while the colloquial sense ‘a bit of work’ dates back to the late 16th century. The surgical sense has been around since the 16th century. The expression “in stitches,” meaning laughing very hard, is a figurative play on making someone laugh so hard they get a stitch in their side. The verb comes from the noun, and dates back to around the year 1200, which coincides with the appearance and later prevalence of the sewing-related meanings.

See full definition
Learn more about stitch in our forums

Stitch in other languages