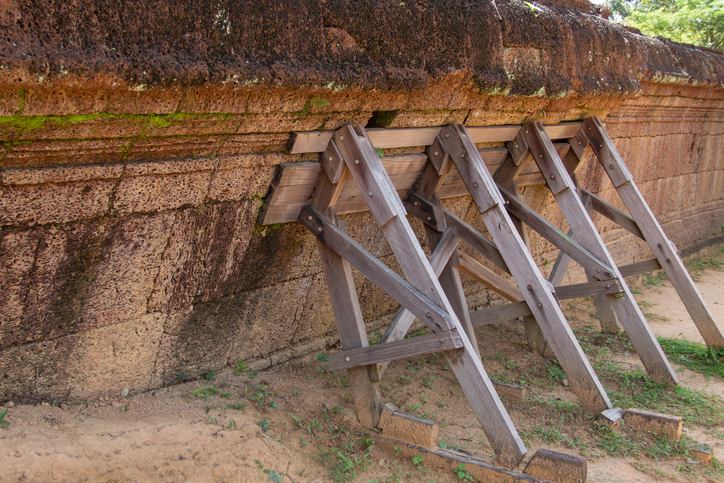 A prop is a support, and to prop means ‘to support and prevent from falling with or as with a prop’ or ‘to rest a thing against a wall or other means of support.’ Usually followed by up, it also means ‘to support or sustain something.’ Unrelatedly, a prop is a movable object used on stage or in a movie to enrich a performance; in this sense it is short for “property.” Prop is also an abbreviation for propeller.

Props are an important part of stage and screen productions for various reasons. Here is a list of the top ten movie props of all time (according to Cinefix), along with explanations of why each prop was so important and what its full role in the movie was:

It’s longer than the videos we usually share with you, but we think it’s well worth watching all the way through if you have time.

Props, always in the plural, is a fairly recent slang word that means ‘proper recognition or respect’ or ‘just dues.’ Example: “That girl he’s talking to is never going to go out with Dan, but you’ve got to give him props for trying!”

Prop dates back to the mid-15th century. The late Middle English noun proppe, meaning ‘support’, came into English from the Middle Dutch proppe, which meant ‘support,’ ‘vine prop’ or ‘bottle stopper.’ Its exact origin is unknown, but most linguists believe that it may have originated in the Latin noun propago (‘a set’ or ‘a layer of a plant’). It’s related to the Old High German pfropfo and the German pfropfen (to prop), as well as the English words propagate and propagation. It’s also related to the Irish propa and the Gaelic prop, though these last two actually came from the English noun. The verb also dates back to the mid-15th century. It may have come from the noun, or from a related Middle Dutch verb. Prop, meaning ‘a movable object used on stage or in film,’ dates back to the late 19th century, and comes from props (mid-19th century), short for properties, which has been used in the theater since the 15th century. Prop, short from propeller, dates back to the early 20th century, while the slang sense, props, meaning ‘proper recognition or respect,’ dates back to 1999.

See full definition
Learn more about prop in our forums

Prop in other languages