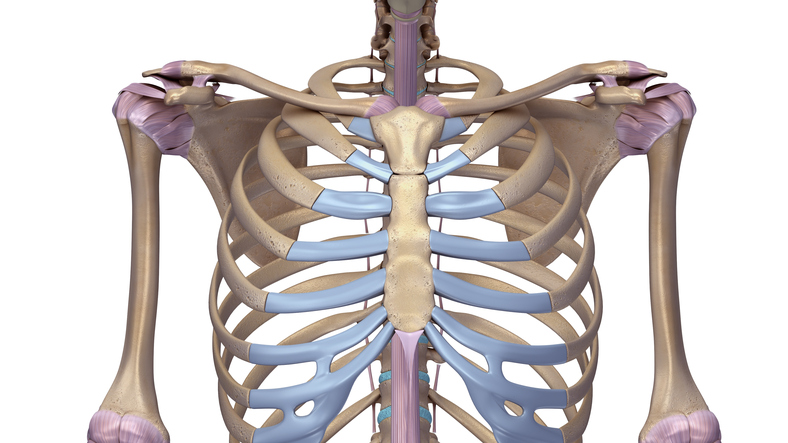 You might already know that a rib is one of a series of curved bones connected to the backbone that we humans and other animals have on each side of our bodies. Rib is also the cut of beef, pork, or lamb that contains the rib. Rib can also be used for anything that resembles a rib in form, position, or use, such as a part that strengthens something. Additionally, rib is a verb used informally to mean ‘tease or make fun of someone.’

In this video, US celebrity barbecuist DJ BBQ and UK celebrity chef Jamie Oliver will show you how to make barbecued ribs:

A rib stitch is a type of stitch in knitting and to rib is to knit using this kind of stitch. Here’s a short video that shows you how it’s done:

Rib dates back to before the year 900. The Old English ribb (which can be found as either ribb or rib in Middle English) meant ‘rib,’ as it does now. It can be traced back to the Proto-Germanic root rebja-, which literally meant ‘a covering,’ from the Proto-Indo-European root rebh- (to roof or cover). It is related to the Old Norse rif, the Old Saxon ribbi, the Old Frisian ribb, the Middle Dutch and Dutch ribbe, the Old High German ribba and the German Rippe (all meaning rib), as well as the Greek ereptein (to roof) and the Old Church Slavonic rebro (rib or reef), and the English words reef and roof, among others. Rib has been used to mean a food item since the 15th century. The verb to rib, meaning ‘to tease or fool,’ dates back to the 1930s, and is probably derived from the idea of poking someone in the ribs.

See full definition
Learn more about rib in our forums

Rib in other languages