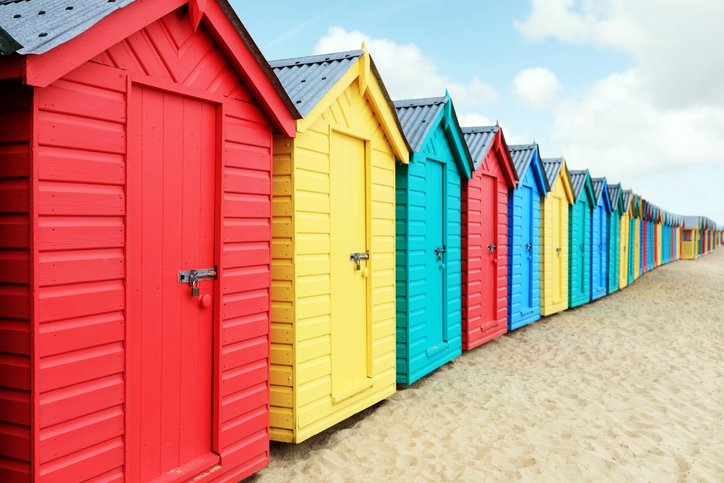 A hut is a small and simple construction or dwelling, especially when made of natural materials, such as logs or grass. A roofed shelter with one or two sides left open can also be called a hut. In military terms, a hut is a temporary structure for housing troops. As a verb, to hut is now rare, but it means ‘to stay or to shelter in temporary housing’ or ‘to furnish with a hut as temporary housing.’

Huts are something you might build as shelter on a desert island if you’ve been cast away. That’s what happens in the popular 1960s US TV show Gilligan’s Island. You can see a scene that takes place in the castaways’ hut here:

Beach huts are small, usually wooden, and often brightly painted buildings above the tideline on a beach. They are used for changing into swimsuits, sheltering from the sun, wind, or rain, and storing possessions. Some huts even have facilities for making hot drinks or basic food preparation, using bottled gas or mains electricity. You often find beach huts at beaches in the UK.

Hut dates back to the mid-17th century. The noun hut, originally used only in the military sense, came into English from the French hutte, which means ‘a cottage,’ but its origin in Germanic. Most linguists think it came into French from a Frankish or other West Germanic source, which in turn came from the Old High German hütte or hüttea, and can be traced back to the Proto-Germanic hudjon– and the Proto-Indo-European root s(k)eu-, meaning ‘to cover or conceal.’ It is related to the Old Saxon hutta, the Danish hytte, the Swedish hytta, the Frisian and Middle Dutch hutte, and the Dutch hut, all with the same meaning, as well as many English words, including hide, hoard, hose, huddle, obscure, scum and even sky. The meaning expanded to any ‘small structure or dwelling’ by the end of the 17th century. The verb, which is now very rare, came from the noun, and first appeared in the late 17th century. It was mostly used in the military sense.

See full definition
Learn more about hut in our forums

Hut in other languages