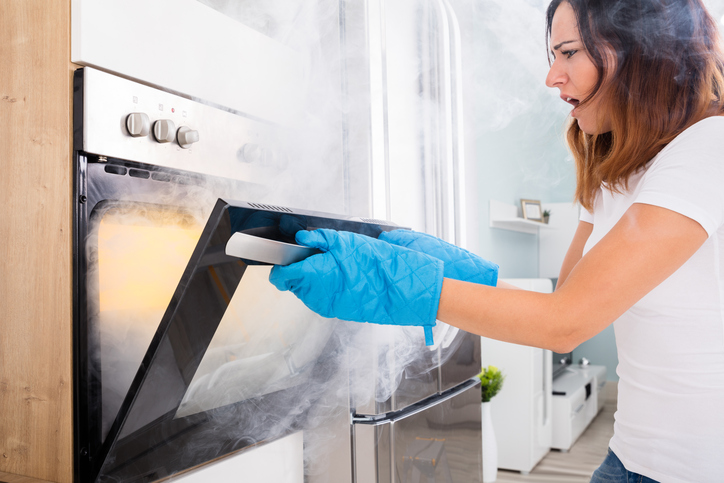 Oh dear, it looks like she made a botch of that!

To botch means ‘to spoil something by doing poor or clumsy work’ and also ‘to do or say something clumsily.’ As a noun, a botch is a clumsy piece of work or a mess. Unrelatedly, a botch is a swelling on the skin of an animal. More rarely, botch is a synonym of plague.

Perhaps unsurprisingly, many people botch work when they try to do home improvements themselves instead of getting an expert to do the work. Home improvement shows are very popular on TV and one that deals specifically with fixing botched DIY (do-it-yourself) jobs and teaching people how to do those jobs properly is the Canadian show Holmes on Homes, hosted by Mike Holmes. You can see the show’s intro here:

In professional wrestling, a botch is when a wrestler makes a mistake in a scripted move or line. You can read more about botches in wrestling here.

Botch, meaning ‘to spoil something,’ dates back to the mid-14th century, in the form of the Middle English verb bocchen. Its origin is unknown. Bocchen originally meant ‘to repair or patch up,’ but by the early 16th century, the meaning had changed, and came to mean ‘to repair clumsily’ or ‘to spoil due to unskillful work.’ Botch, meaning ‘to swell up or fester,’ or ‘to bulge or project’ dates back to the early 15th century, also in the form of the Middle English verb bocchen. It came into English from the North French boche, a dialectal variant of the Old French boce. These are several equivalents in other Romance languages around that time, but the origin is unknown. Some linguists believe that both verb senses of botch are related, but most do not, since there is not much evidence for this. The noun botch, meaning ‘a boil, swelling or tumor,’ especially from the plague, dates back to the late 14th century, in the form of the Middle English noun bocche. It is related to the verb of similar meaning, but probably came into English from the North French. Its meaning expanded to ‘a lump on a cripple’ and the figurative senses ‘a corrupt person’ and ‘a rotten condition’ near the end of the 14th century. The noun meaning ‘a clumsy piece of work’ or ‘a mess’ dates back to around the year 1600, and probably comes from the verb with related meanings. Some linguists think both nouns are related, but there is, again, no evidence.

See full definition
Learn more about botch in our forums

Botch in other languages