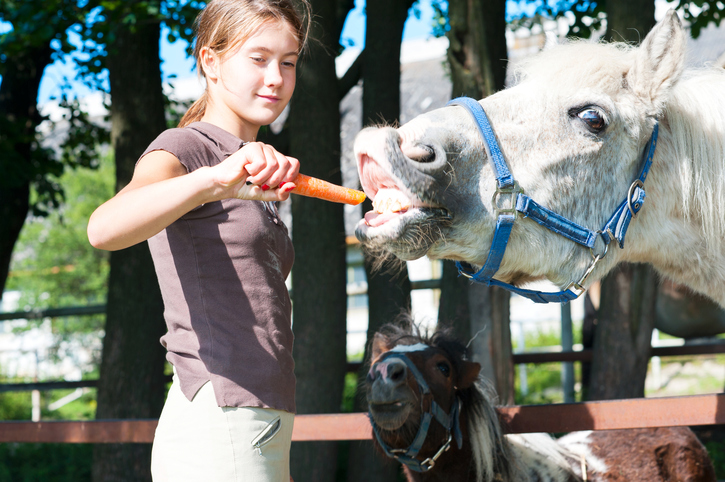 Obviously, to feed means ‘to give food’, ‘to provide as food,’ and, especially of animals, ‘to eat.’ Figuratively, ‘to provide with what’s necessary for mantainence or operation’ and ‘to satisfy or gratify’ is also to feed. But did you know that feed has other specific meanings? In theater, it means ‘to provide cues or lines to an actor’ and, in broadcasting, ‘to distribute a local broadcast via satellite network.’ As a noun, feed is not only the food given or the material supplied, but also a line spoken by an actor or a local television broadcast, distributed by satellite.

spoon-feed: literally this would mean to feed someone with a spoon, like you might do with a baby, but it is mostly used figuratively to mean that you give someone everything they need, rather than them needing to do anything for themselves. Example: “The professor made it clear to the students that she wasn’t there to spoon-feed them. They would need to spend time in the library doing their own research.”

feed the fishes (slang, dated): have drowned. Example: “The boat went down taking the captain with her. He’s been feeding the fishes for many a long year now.”

If you use social media, you may well be familiar with news feeds, even if you didn’t know that was the English word for it. The news feed is basically the bit of the social media site that shows you what activity has been taking place on the site. Here is a short clip explaining how Facebook’s news feed works:

Informally, a feed is a meal. Example: “Why don’t you come over to our place for a feed over the weekend.”

Feedback is a term used in electronics and it is the process of returning part of the output of a circuit, system, or device to the input. Feedback, or acoustic feedback, is also the term for the high-pitched sound microphones sometimes make due to electrical oscillations. Feedback is also a reaction or response to something, particularly one that evaluates the thing being reacted to. Example: “The new employee was pleased to get some positive feedback from the boss.”

Feed dates back to before the year 950. The Old English verb fēdan (pronounced feed-an), which became feden in Middle English, meant ‘to nourish,’ ‘to give food to,’ ‘to sustain’ or ‘to foster’ someone or something. It can be traced back to the Proto-Germanic fodjan and the Proto-Indo-European pa- (‘to protect’ or ‘to feed’). It is related to the Old Saxon fodjan, the Old Frisian feda, the Dutch voeden, the Old High German fuotan, the German fressen, the Old Norse foeða and the Gothic fodjan (all meaning ‘to feed’), as well as many different English words, including pantry, companion, company, pastor, pasture, foster, pester, fur and fodder, as well as (obviously) food. The intransitive sense, ‘to eat or take food’ dates back to the 14th century. The meaning ‘to supply’ dates back to the early 18th century, and has been used both literally (to supply food) and figuratively since then. The noun comes from the verb and, meaning ‘the action of feeding,’ dates back to the mid-16th century. The meaning ‘food for animals’ first apperared in the late 16th century, and it has been used to mean ‘a meal’ since the early 19th century. The machine-related sense was first used in the late 19th century.

See full definition
Learn more about feed in our forums

Feed in other languages