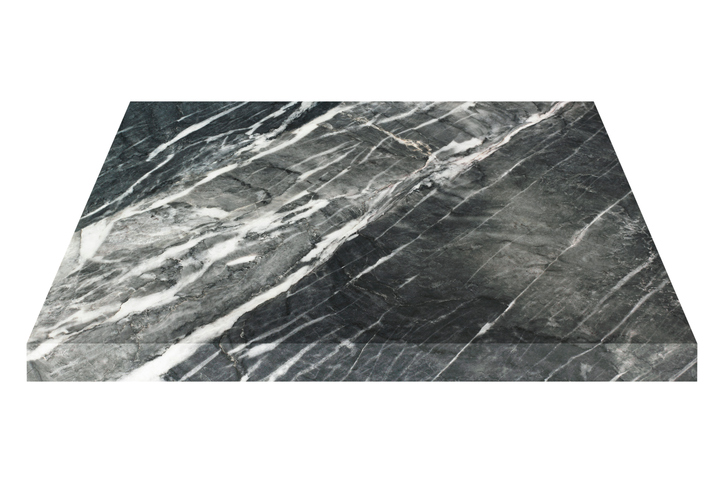 You’ve probably seen many marble statues, haven’t you? Marble is limestone that has been changed into a hard rock and is used in sculpture and in construction. Figuratively, something that resembles this rock, because it seems similarly hard, cold, or smooth can be called marble, as can something that has streaked coloring like some types of the material. In these literal and figurative senses, marble is uncountable. As a count noun, a marble is a little ball of glass that kids used to play with a lot and, in the plural, it is the name of the game they played. Colloquially and always in the plural, marbles means ‘sanity, wits.’ As an adjective, it means ‘made of marble’ or ‘resembling marble.’

lose your marbles: lose your mental faculties or sanity. Example: “You’ve given up a good job to go backpacking around the world at the age of 55? Have you lost your marbles?”

In these days of constant electronic entertainment, we aren’t sure how many children still play marbles, but it certainly was a popular game for kids for centuries. Originally, the balls would have been made out of marble, which is how they got their name, but now they are nearly always made of glass. If you or your children would like to know how to play, this short video will get you started:

Marble can also be used as a verb. When it is, to marble means ‘to give something the appearance of marble.’ Example: “The artist used a mixture of oil paint and water to marble a sheet of paper.”

As a count noun, a marble can be a marble statue or sculpture. In this sense, it is particularly used in the plural to refer to collections of sculptures, such as the Elgin Marbles, which are housed at the British Museum in London. The Elgin Marbles are part of a larger collection called the Parthenon Sculptures because it includes all the surviving sculptures from the Parthenon in Athens. The Elgin Marbles have been a subject of contention between the Greek and UK governments for decades, with the Greek government petitioning for the marbles’ return since the early 1980s. You can read more about the Parthenon Sculptures, the Elgin Marbles, and the controversy on the British Museum’s website.

Marble, meaning the type of stone, dates back to the mid-12th century, in the form of the late Old English noun marmel, which came into English from the Old French marbre, which can be traced back to the Latin marmor and the Ancient Greek μάρμαρος, or mármaros, which meant ‘marble or gleaming stone.’ Its origin is uncertain, but it is likely related to the Ancient Greek adjective μαρμάρεος (marmáreos), meaning ‘gleaming,’ and the Ancient Greek verb μαρμαιρειν (marmaírein), ‘to shine or sparkle.’ Some linguists believe that the origin is geographical: most of the marble the Greeks used came from the Marmaris sea, above the Aegean. Mármaros, as well as the two related Ancient Greek words, may have been a reference to this “sparkling” sea. It’s worth mentioning that marble was used in the British Isles before the 12th century. The Latin word marmor was often used to name the stone, and soon became the Old English marbra. Linguists consider, though, that this word was completely replaced by the French form, and date the origin from this dominant noun. By Middle English, marmel had dissimilated into marbel, and the spelling marble was fixed in the early 17th century. The meaning ‘little balls of marble used to play’ dates back to the late 17th century. The adjective, meaning ‘of marble,’ comes from the noun, and dates back to the late 14th century. The verb also comes from the noun, and dates back to the late 17th century.

See full definition
Learn more about marble in our forums

Marble in other languages

Intermediate+ Word of the Day: spit