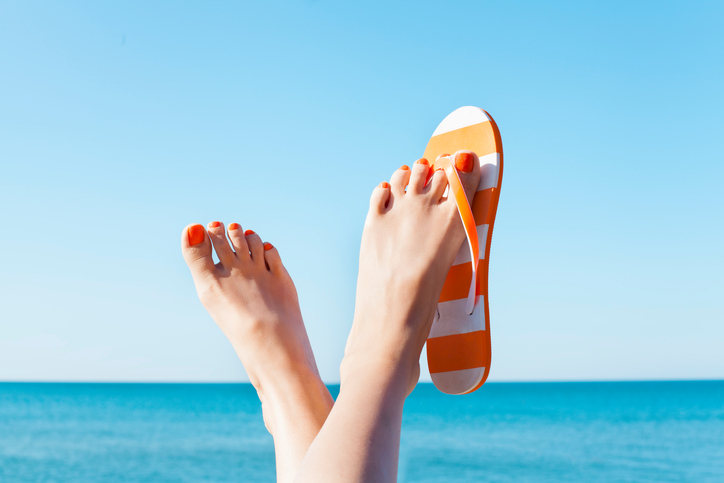 You know already that a foot is at the end of each of our legs and that we stand and move on them. Anything resembling a foot, in shape or function, is also a foot, as is the lowest part or bottom of anything, like a hill, staircase, or page, or the part of anything considered to be opposite to the top or the head. A foot is also a unit of length equal to 30.48 centimeters. As an adjective, foot means ‘operated with the foot or feet’ or ‘moving on foot.’

footnote: a note at the bottom of a page. Example: “Make sure you mention the source of your quotations in the footnotes.”

foot the bill: pay for something, especially expenses incurred by someone else. Example: “When their teenage son scrawled graffiti on the wall of the park, it was Mark and Debbie who had to foot the bill for getting it cleaned off.”

put your foot down: be firm. Example: “Lisa normally gave in to her children’s requests for sweets, but this time she put her foot down and said no.”

put your foot in your mouth, put your foot in it: say the wrong thing. Example: “Not realizing his girlfriend’s dad was a keen golfer, Mason really put his foot in his mouth by saying what a stupid sport he thought golf was.”

under foot: in the way. Example: “That dog always manages to be under foot!”

set foot in: enter. Example: “That woman will never set foot in my house as long as I’m alive!”

The movie My Left Foot is a biopic about the Irish writer and painter Christy Brown, who achieved success despite being born with cerebral palsy and only being able to write and paint with his left foot. You can see a clip from the movie here:

In Scotland and the north of England, a first foot or first-footer is the first person to enter a house on New Year’s Day. The first foot is supposed to bring luck to the house for the coming year and they usually bring gifts representing various good things for the household, such as a coin to represent wealth or a piece of coal to represent warmth. You can read more about first-footing here.

Foot dates back to before the year 900. The Old English noun fōt comes from the Proto-Germanic fot, and can be traced back to the Proto-Indo-European root ped– (foot). It is related to the Old Frisian fot, the Old Saxon fot, the Old Norse fotr, the Danish fod, the Swedish fot, the Dutch voet, the Old High German fuoz, the German Fuß and the Gothic fotus (all meaning ‘foot’), as well as the Latin pēs, pedis (foot) and the Greek noun poús and stem ped-, from which many words meaning or related to foot come. This includes the English words pedal, pedestrian, pedicure, pedigree, octopus, peon, pew, pilot, impair, impeach, fetter and fetch, among many, many others. The unit of measurement has existed since before the year 900 as well, but then it was simply the length of a man’s foot, so it could vary depending on the country, city or even trade using it. Throughout history, the length of a foot has been standardized several times, but even then it could vary, because it was used by different cultures that set different standards. Most foot measurements fell between 25 and 33 cm, and were divided into 12 inches or 16 digits (which also varied). In the 19th and 20th centuries, as cultures became more interconnected, the variations disappeared, so by the 20th century the foot was usually around 30 cm. Its exact length of 30.48 cm was set in 1959. The verb comes from the noun, and dates back to around the year 1400. It originally meant ‘to dance’ as well as ‘to move or travel on foot.’ Foot has also been used as an adjective since the early 16th century.

See full definition
Learn more about foot in our forums

Foot in other languages