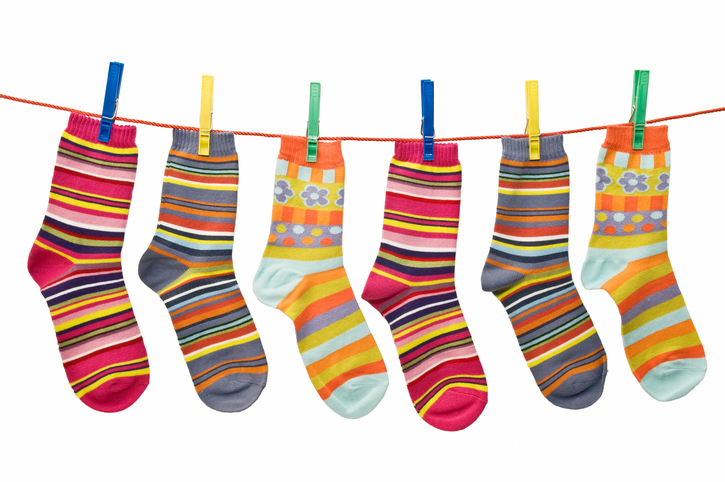 You probably already know that socks are the pair of short, or long, stockings we wear on our feet. However, did you know that sock is also a verb? It is a colloquial term and means ‘to hit or strike very hard’ and, related to this meaning, the noun sock is ‘a hard strike or blow.’ In US show business slang, a sock is a great and successful performance, show, or actor, and the adjective sock means ‘excellent, extremely successful.’

sock away: to save or put into reserve. Example: “If you sock 10% of your salary away every month, you’ll soon have a healthy savings account.”

sock in (US, dated): close or unable to go out because of bad weather. Example: “We’re were socked in for a week after the blizzard.”

knock the socks off someone, knock someone’s socks off: make a strong impression on. Example: “The young man’s talent knocked the judges’ socks off.”

pull your socks up (UK): make an effort. Example: “You’re not a child anymore; it’s time you pulled your socks up and got a proper job.”

Sock puppets are simple puppets made by putting a sock over your hand. There is a YouTube channel called Sock Puppet Parody, which makes parodies (funny versions) of popular songs using sock puppets. You can see their version of Michael Jackson’s “Thriller” here:

You might wonder why sock away means to save or put into reserve. It’s because people used to store any spare money they had in a sock. By extension, sock became a term for a store of money. You aren’t very likely to hear people use the noun sock in that sense anymore, but the verb is still used.

Sock, meaning ‘a knit or woven covering for the foot’ dates back to before the year 900. The Old English noun socc, which became the Middle English socke, came into English from the Latin soccus (‘slipper’ or ‘light, low-heeled shoe’). The Latin word was borrowed from the Greek sykchos (a type of shoe), and probably originated in an Asiatic language, possibly Phrygian (spoken in Asia Minor at the time of the Classical Greek period). Many Germanic languages have or had related words (most of them also came from the Latin), including the Middle Dutch socke, the Dutch sok, the Old High German soc and the German Socke. The expression ‘knock the socks off someone’ dates back to the 1940s and was first used in the US. The verb to sock (away), meaning ‘to save money,’ comes from the noun, and was first used in the US in the 1940s. The verb sock, meaning ‘to beat or hit hard’ dates back to around the year 1700. It is unrelated to the piece of clothing, but its origin is unknown. The noun, meaning ‘a blow or punch’ comes from the verb, and also dates back to around the year 1700. The use of sock in show business, meaning ‘a successful show or actor,’ and its related adjective, are figurative senses derived from the idea of a sock “hitting” the audience (much in the way we now hear that something was “a hit.”)

See full definition
Learn more about sock in our forums

Sock in other languages