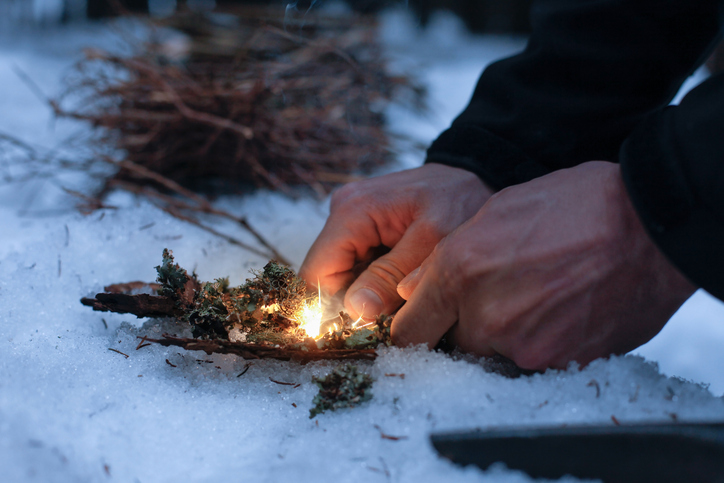 To kindle means ‘to make a flame begin burning’ and, more broadly, ‘to start a fire’ and also ‘to set fire to something.’ Figuratively, it means ‘to light up,’ ‘to arouse, excite, or stir up something or someone,’ or ‘to become aroused, excited, or stirred up.’

You can listen to Leonard Cohen’s song “Different Sides,” from his 2012 album Old Ideas, and read the lyrics here:

Listen out for the lyric “The waters are blessed while a shadowy guest kindles a light for the lost.”

Kindle is also the name of Amazon’s popular e-reader, a device for downloading and reading electronic books.

Kindle can also mean ‘to give birth to,’ especially when we are talking about rabbits. As a noun, a litter of baby rabbits or kittens can also be called a kindle. These two meanings are quite rare though.

Kindle, meaning ‘to set fire to something or set something on fire,’ dates back to the mid-12th century. The late Old English verb cundel soon became the Middle English kindlen. It can be traced back to a Scandinavian source, and is related to the Old Norse kynda (to kindle) and kindill (torch) and the Swedish quindla (to kindle), but the origin before then is unknown. Earlier, some linguists traced it back to the Latin candela, making it related to the English word candle, but nowadays most researchers think that was wrong. The change in spelling between Old English and Middle English is due to the influence of the Middle English verb kindelen. meaning ‘to give birth’ (said of animals) and ‘to bring forth or produce,’ which derived from the noun kindel, meaning ‘offspring.’ This relation also influenced some of the figurative senses that appeared in Middle English, especially in connection with feelings or passions, around the year 1300. The intransitive sense, ‘to catch fire’ or ‘to start burning’ dates back to around the year 1400.

See full definition
Learn more about kindle in our forums

Kindle in other languages