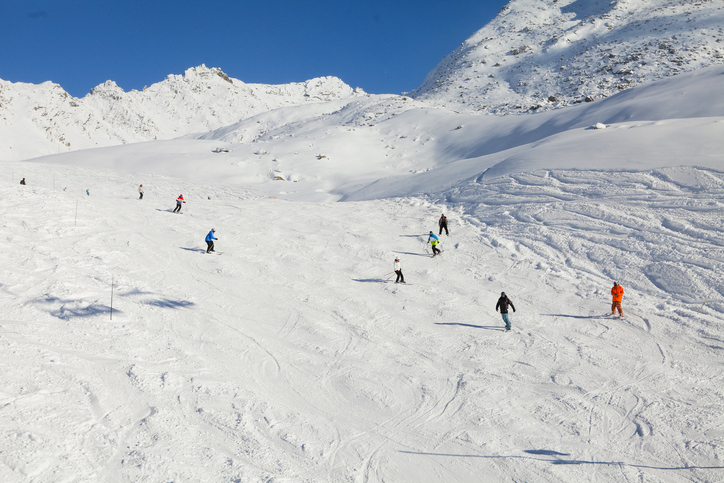 To slope means ‘to have an inclined or oblique direction or angle’ and also ‘to move at such inclination.’ To form something with such an inclination is also to slope. As a noun, a slope is ground that has a natural inclination, like the sides of a hill. It is also the inclination itself or any other inclined surface.

slope off (UK): make your way slowly or furtively. Example: “Where did you slope off to yesterday? I saw you leaving the meeting early.”

slippery slope: a course of action that is likely to lead to a bad situation. Example: “For many people, taking soft drugs is just the start of the slippery slope into addiction.”

Listen out for the lyric “This slope is treacherous.”

Slopes in the plural is often used as a shortened form of ski slopes. It may also be used to mean ‘foothills.’

In mathematics, slope is the direction and steepness of a line on a graph. You can read more about the mathematical meaning of slope here.

Slope has been used as a verb meaning ‘to go in an oblique direction’ since the late 16th century. It evolved from the earlier adverbial (and possibly adjectival) use of slope, around the year 1500, meaning ‘slantingly’ (or ‘slanting,’ as an adjective) which was, in turn, a shortened form of the Middle English adjective and adverb aslope, with the same meaning, which some think happened because of its similarity to the existing verb lope (to leap, jump, or run with long strides). It can be traced back to the Old English adjective and adverb aslopen, which originated as the past participle of aslupan (to slip away). It can be traced back to the Proto-Indo-European root sleubh– (to slide or slip), from the root (s)lei- (slimy, slippery or sticky). It is related to many other words in English, including slip, slipper, slime and sleeve, as well as Germanic words of similar meanings, such as the Middle Low German slippen, the Old High German slifan, the Middle Dutch slippen and the German schleifen (all meaning ‘to glide or slide’). The meaning ‘to place in a slanting position’ is from around the year 1600, but the intransitive sense, ‘to be in a slanting position,’ appeared in the early 18th century. The noun, meaning ‘inclination,’ comes from the verb, and dates back to the early 17th century. The meaning ‘an incline or slant,’ usually of the ground, appeared soon after.

See full definition
Learn more about slope in our forums

Slope in other languages