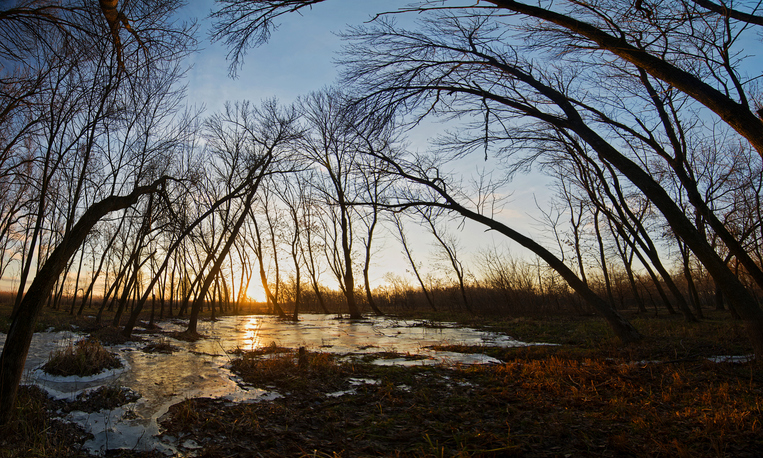 To slant means ‘to turn away from a straight line,’ especially a horizontal line. Figuratively, it means ‘to distort information by presenting it from a particular viewpoint’ or ‘to present something in such a way as to interest a particular group.’ As a noun, a slant is a slope, an oblique direction or angle, or, figuratively, a mental leaning or distortion or a point of view or opinion. Informally, in US English, a slant can be a glance or look. In US English, slant can also be used as an adjective meaning ‘sloping.’

In American football, a slant is an offensive play in which the ball-carrier runs toward the line of scrimmage at an angle. This video explains how to run a slant route:

In journalism, a slant is the particular mood in which something is written, edited, or published. This can also be called an angle. For example, you can talk about something being written with a humorous slant or a socialist slant.

When we are talking about light or shadow, to slant means ‘to fall at an oblique angle’ and slants of light are rays of light that fall in this way. Example: “The early morning light was slanting through the curtains.”

Slant, originally meaning ‘to strike at an angle,’ dates back to the late 15th or early 16th century. Linguists disagree on its exact origin. Some believe that it is a variant of the Middle English adjective aslant (literally ‘on slant’ or ‘slanting’), which came from a Scandinavian source, while others think the verb evolved from the Middle English slenten (to slip sideways), and was influenced by aslant. Either way, all agree that the origin was probably Scandinavian word, and that it can be traced back to the Proto-Germanic verb slintanan. It is related to the Swedish verb slinta (to slip) and the Norwegian verb slenta (to fall on one side). The intransitive sense ‘to slope or to lie at an angle’ appeared in the early 17th century, while the transitive sense ‘to give a sloping direction to’ is from the early 19th century. The noun, meaning ‘an oblique direction or plane,’ comes from the verb, and dates back to the mid-17th century. It was originally used to describe landscapes, but soon spread to other contexts. The meaning ‘a way of looking at something’ is from the early 20th century. Though rare, slant has also been used as an adverb since the late 15th century and an adjective since the early 17th century.

See full definition
Learn more about slant in our forums

Slant in other languages