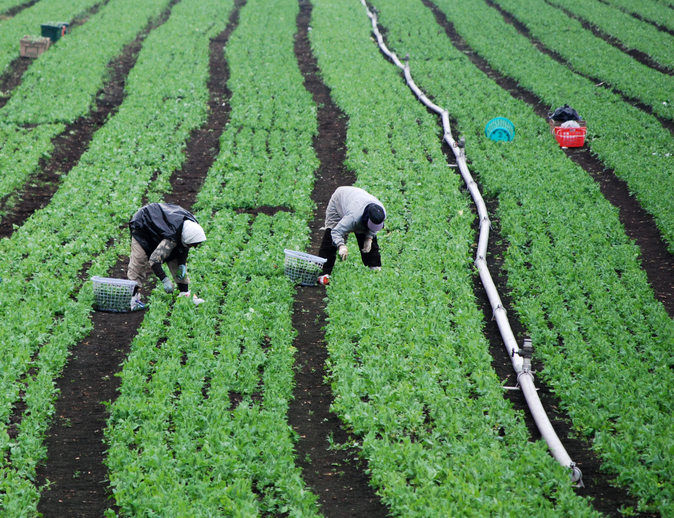 As an uncountable noun, toil is hard and exhausting work or, by extension, the result of such work. As a countable noun, it is a period of intensive work or a task requiring hard work. The verb to toil means ‘to engage in continuous hard work,’ but it can also mean ‘to move or travel with great effort or difficulty.’ Unrelatedly and usually in the plural form, toils are a net or series of nets in which a wild animal is trapped, and so, figuratively, toils means ‘trap.’ However, this sense is now only used in a literary register.

“Double, double toil and trouble” is part of the spell uttered by the three witches in Shakespeare’s Macbeth. You can read the full text of the spell here, and watch it in this 2010 TV adaptation of the play (the spell is spoken very quickly):

“Double, double toil and trouble” is also part of a song, adapted from Shakespeare’s lines and set to music by John Williams, for the movie Harry Potter and the Prisoner of Azkaban. You can watch and listen to that version here:

In the UK, TOIL is an acronym for ‘time off in lieu.’ This is additional time that an employee has worked and that he or she can then take as holiday later. The acronym is also a humorous reference to the fact that the person has had to toil in order to gain that time off.

Winston Churchill is one of Britain’s best known prime ministers, having led Britain for most of the Second World War. You can listen to his first speech as prime minister here:

The speech was given in 1940, when Britain was already at war, and in it, Churchill states that he has “nothing to offer, but blood, toil, sweat, and tears.”

Toil dates back to the late 13th century. The Middle English noun toile originally meant ‘turmoil, contention or dispute.’ It came into English from the Anglo-French toil (contention), from the verb toiler (‘to contend’ or ‘to agitate or stir up‘), and earlier the Old French verb toeillier (‘to drag around’ or ‘to make dirty’). It can be traced back to the Latin verb tudiculāre (‘to stir up,’ ‘to beat‘ or ‘to crush’), derived from tudicula, the name given to a mill used for crushing olives, which in turn came from tundere (to beat) and tundes (a hammer), all from the Proto-Indo-European root tud-, a variant of steu– (to push, stroke or beat). It is related to many English words, including obtuse, stroke, strike, stoop, pierce, stub, stutter, stint, stoke, steep and even stupid. The sense ‘hard work’ dates back to the late 16th century; its appearance and later dominance was influenced by the verb toil. The verb came into English slightly later, in the early 14th century, and is not usually considered to have come from the noun. Instead, the Middle English verb toilen (originally meaning ‘to tug or pull at”) came in through the Anglo-French verb toiler (so its origin is otherwise the same as the noun). The intransitive sense meaning ‘to struggle or work hard’ dates back to the late 14th century, and may have been influenced by the verb till. The unrelated noun toil, meaning ‘net or snare,’ dates back to the early 16th century. It came into English from the Middle French toile (net, cloth or web for hunting), from Old French toile (cloth). It can be traced back to the Latin tela (cloth) from the Proto-Indo-European root teks- (to weave or fabricate). It is related to the Old Persian taxš- (be active), the Latin texere (to weave or fabricate), the Greek tekton (carpenter) and tekhne (art), and many others in modern languages, as well as English words like architect, text, context, subtle, technical, technology and tissue.

See full definition
Learn more about toil in our forums

Toil in other languages