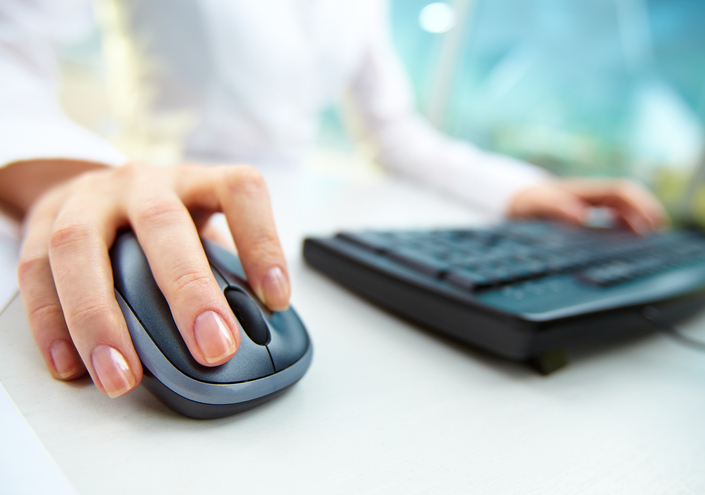 A click, you might know, is a sharp sound. The related verb means ‘to make such a sound’ and, informally and figuratively, ‘to become suddenly understood or clear.’ Figuratively if things click, it means that they go well together or if two people click, it means that they like each other immediately. More literally, to click means ‘to strike together with a clicking sound.’ We’re sure you know that in computing, to click means ‘to press and release a mouse button’ and that click, as a noun, is the sound that movement makes.

Click is the title of a 2006 movie about a man who is given a remote control allowing him to pause, rewind, or fast-forward his life. You can see the movie trailer here:

Informally, in US military slang, a click is a kilometer, so you might hear someone say that something is “ten clicks from here.”

We all do a lot of clicking these days, so it is perhaps unsurprising that click is becoming ever more present in our vocabulary, including being used as a prefix or as a part of portmanteau words (that’s where two words are combined to make one new word, for example, brunch is a combination of breakfast and lunch). Two words that have entered the English vocabulary in recent years are clickbait and clicktivism. Clickbait is a link that makes you want to click on it to go to another website, like a headline that makes you really curious to know more. Clicktivism is a combination of click and activism and it is people using the internet as a way of taking political action, through signing online petitions or social networks to increase awareness of a cause, for example.

Click, meaning ‘to cause to make a small, sharp sound,’ dates back to the late 16th century. Its origin is uncertain. Some believe that it came into English from the Middle Dutch verb clicken, and originally emerged as an imitation of the sound in either Middle Dutch or another Germanic (or possibly Scandinavian) language. If this is the case, it is related to the Saterland Frisian klikke, the Modern Dutch: klikken, the Old High German klecchen, the Modern German klecken or klicken, the Danish klikke, the Swedish klicka, the Norwegian klikke (all meaning ‘to click’), and the Norwegian klekke (to hatch). Others think that it emerged as an imitation of the sound directly in English, and the related words in other languages would then be related merely because they are similar imitations of the same sound. The intransitive sense, ‘to make a small, sharp sound,’ appeared in the early 17th century. The figurative sense of people getting along dates back to the early 20th century, and is a play on the sound a key makes when it fits a lock. The sense ‘to fall into context’ or ‘be understood’ plays on the same idea, and dates back to the late 1930s. The noun dates back to the early 17th century. It may have come from the verb, but may have also emerged separately from an imitation of the sound.

See full definition
Learn more about click in our forums