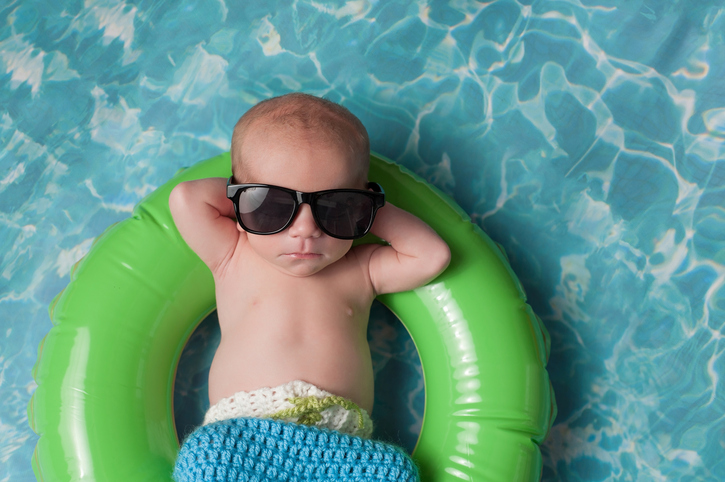 This baby is hip.

The hip is the part on each side of our bodies where where the thigh bone meets the pelvis and also the joint of this area. Unrelatedly, the hip is the ripe fruit of a rose. As an adjective, hip is a slang word and when we say that someone is hip, we mean that they are aware of the latest ideas, developments, and styles–in other words they are “cool.” We can also say they are hip to something, which means that they know about it. Informally, it also means ‘agreeable, willing.’

You may have heard the related word hipster, which is used, as an adjective, to describe a contemporary subculture and, as a noun, to describe the people belonging to this subculture. What you may not know is that the word previously appeared in the 1940s and referred to people who were jazz enthusiasts and lived in a way that was similar to jazz musicians, including drinking and drugs, use of slang associated with the jazz subculture, and a more relaxed attitude to sex than was normal at the time. Modern day hipsters also reject mainstream culture. They tend to be urban-dwelling people in their 20s or 30s who work in the creative or digital industries. They buy a lot of their clothes from second-hand stores and like alternative and independent music. They are generally interested in alternative lifestyles and like organic and artisanal food and drink. Hipster men normally have facial hair. Not sure if you are a hipster or not? This rather ironic video gives some more insight into what hipsters are by contrasting them with geeks and nerds (who are generally considered to be the opposite of hip):

In English, when we want to get a group of people to cheer something, we say, “Hip hip hooray.” It takes the form of a call and answer, with the person asking the group to cheer calling, “Hip hip,” and then everyone joining in on “hooray” (which can also be spelled hurray, hurrah, or hoorah). It would normally be preceded by the person requesting “three cheers” for the person or achievement to be cheered and then the call and answer of “Hip hip hooray” is repeated three times. You can see an example of hip hip hooray being used in this clip from the Queen’s Diamond Jubilee (the 60th anniversary of her becoming queen):

Hip, the body part, dates back to before the year 1000. The Old English hype (the pronunciation is a bit tricky: the y should sound like the u in French or the ü in German, and the final e sounds like a regular e), which became the Middle English hipe, hupe, comes from the Proto-Germanic hupiz, but linguists are unsure where that noun came from. It is related to the Dutch heup, the Old High German huf, the German Hüfte, the Swedish höft, and the Gothic hups, all of which mean ‘hip.’ Some speculate that it may share an ancient origin with the Greek kýbos (‘cube,’ as well as ‘the hollow above the hips of cattle’) and the Latin cubitus (elbow). It has been used in architecture, meaning ‘an external angle at the junction of two sides of a roof’ since the late 17th century. Hip, meaning ‘seed pod’ (especially of a rose) dates back to before the year 900. The Old English hēope (pronnounced he-o-pe, where the first e is a bit long, and the final one is not silent) and the Middle English hepe (he-pe), which meant ‘hip or briar,’ come from the Proto-Germanic root hiup-. The origin before that is also unknown. Finally, the adjective hip dates back to the year 1904, originally meant ‘informed,’ and was African-American slang. It comes from the adjective (with the same meaning) hep, which started to be used four years earlier.

See full definition
Learn more about hip in our forums

Hip in other languages