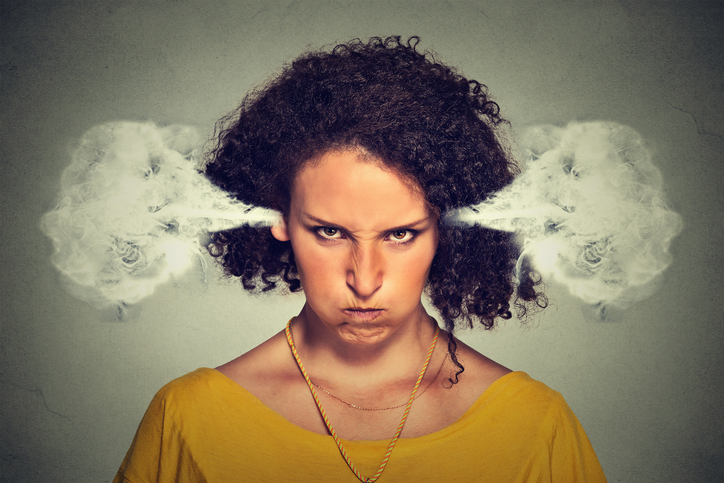 It looks like someone has goaded her to anger.

A goad is a rod with a pointed (or, nowadays, sometimes electrically charged) end for driving cattle or other animals. Figuratively, something that drives, urges, or encourages can also be a goad. The related verb to goad means ‘to drive or prick with or as if with a goad’ and, figuratively, ‘to encourage or incite’ or ‘to provoke.’

If you goad someone, you are generally trying to spur them to do something or to provoke them to an angry or annoyed reaction, much like someone might react to being prodded with a literal goad. In these clips from the TV show Stranger Things, you can see new student Billy goading Steve on the basketball court:

Goad dates back to before the year 900. The Old English noun gād, which became the Middle English gode, could mean ‘a point, spearhead or arrowhead’ as well as ‘a pointed stick used for driving cattle.’ It can be traced back to the Proto-Germanic gaido (goad or spear). It is related to the Lombardic gaida (spear), as well as the Sanskrit hetih (missile or projectile) and himsati (he injures), the Avestan zaena- (weapon), the Greek khaios (shepherd’s staff), the Old Irish gae (spear) and the Old English gar (spear), which is still used today, but only as the name of a type of fish, which resembles a spear. It is also loosely related to the word garlic. The figurative sense, for anything that urges or stimulates someone to do something, has been used since the 16th century, and probably originated in a translation of the Bible from that time. The verb comes from the noun, and dates back to the mid-16th century. It was first used figuratively, meaning ‘to incite, stimulate or instigate;’ it has been used figuratively since the early 17th century.

See full definition
Learn more about goad in our forums

Goad in other languages