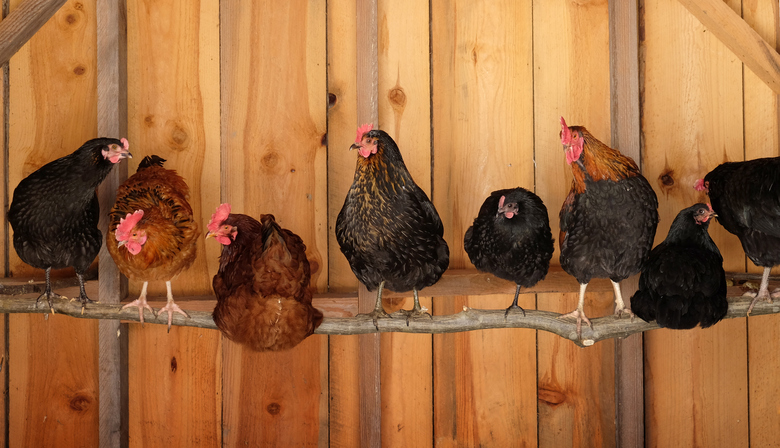 A roost is a place where birds perch to rest, or any large cage or house for birds to rest in. Figuratively, any place to rest can be called a roost. To roost, as a verb, means ‘to sit or rest in a roost’ and, figuratively, ‘to settle or stay, especially to rest by night.’

come home to roost: we say this about an action that ends up having a negative effect on the person who performs the action. Example: “The politician’s mistakes came home to roost and ruined his career.”

rule the roost: be in charge. Example: “The cat rules the roost in our house!”

Listen out for the lyric “Chicken, chicken, you can’t roost too high for me.”

Figuratively, a group of birds roosting together is also often called a roost.

In US and Australian English, a rooster is a male chicken. In the UK, a male chicken is called a cock, but people often say cockerel instead, which, strictly speaking, is a young cock. Nevertheless, you are likely to hear people use cockerel for male chickens of any age as a way of avoiding saying cock, which is also a vulgar slang term for a penis.

Roost dates back to before the year 1100. The late Old English noun hrōst originally meant ‘a framework with a roof, used as a perch for domesticated birds.’ It can be traced back to the Proto-Germanic noun hrō(d)staz (‘wooden framework’ or ‘grill’), though its origin before then is unknown. It is related to the Old Saxon hrost (framework of a roof, attic), the Middle Dutch, Flemish and Dutch roest (roost), the Old Norse hrot and the Gothic hrot (roof), and the German Rost (grate, gridiron or grill). The spelling changed to roost in Middle English, and while the original meaning remains, it was also extended to include the idea of a hen house in general in the late 16th century. It has been used figuratively to mean any place to rest since around the same time. The verb comes from the noun, and dates back to the early 16th century. The expression come home to roost first appeared in the early 19th century.

See full definition
Learn more about roost in our forums

Roost in other languages

Word of the Day: suit