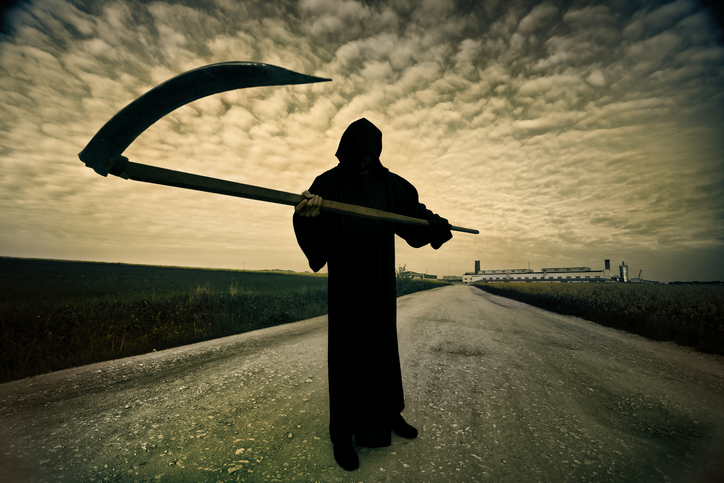 Grim is an adjective that means ‘stern and allowing no compromise.’ It can also refer to anything of a sinister character, and also to something cruel or savage. When we use grim to talk about people or things, it can mean ‘harsh or intimidating’ in either looks or, in the case of people, behavior. More broadly, it means ‘unpleasant.’

“Grim Grinning Ghosts” is the song played at the Haunted Mansions attractions at Disney’s theme parks. You can watch and listen to a sing-a-long version of it here:

In British folklore, a church grim is a spirit that guards churchyards. It usually takes the form of a large black dog. It’s no longer common now, but grim was used as a noun to mean ‘a specter or haunting spirit.’

The grim reaper is the personification of death. He is usually depicted as a skeleton wearing a hooded black cloak and carrying a scythe (an old farming implement with a long handle and a sharp curved blade, used for reaping wheat, corn, or other cereal crops by cutting through the stalks).

Grim dates back to before the year 900. The Old and Middle English adjective grimm originally meant ‘fierce, cruel or savage’ as well as ‘dire, severe or painful.’ It can be traced back to the Proto-Germanic grimmaz and the Proto-Indo-European root ghrem– (angry). Some linguists believe that it emerged as an imitation of the sound of thunder, but this would be difficult to prove one way or another. It is related to the Old Norse grimmr (grim or angry), the Old Saxon, Old Frisian, Old High German and German grimm (grim, angry or fierce), the Old Norse grimmr (stern, horrible or dire), and the Swedish grym (fierce or furious). The sense ‘dreary or gloomy’ appeared around the 12th century, and is considering a weaker form of the meaning that eventually took over. Grim also had a verb form in Old English, grimman, but this use was lost by the 12th century. The related noun grima, meaning ‘goblin or specter,’ also existed in Old English before the year 900, but fell out of use by the early 12th century. Grim began to be used as a noun to mean ‘specter or ghost’ in the early 17th century, but it is thought that this use emerged because of the influence of another language or even ancient literary texts, and is not directly connected to the older noun.

See full definition
Learn more about grim in our forums

Grim in other languages