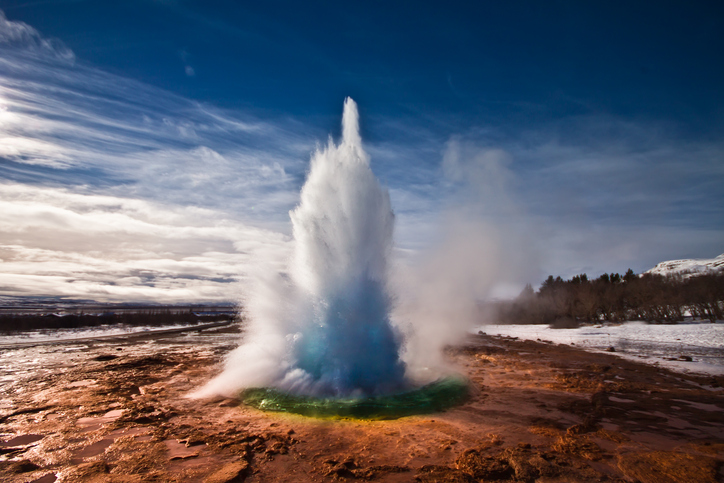 To gush means ‘to flow out suddenly and with force,’ as liquids do when released from somewhere they have been contained. Figuratively, if a person talks too much and effusively or emotionally about something, that is also to gush. If tears or blood suddenly come out, that is to gush as well. As a noun, a gush is a sudden flow of liquid, blood, or tears and, figuratively, an excessive flow of anything, such as emotion or words.

gush about something or someone: to heap praise or speak (or write) enthusiastically about something. Example: “Sara just can’t stop gushing about the magical date she had with Tom on Friday. I think she may be falling in love with him!”

An uncontrolled release of oil from an oil well while drilling causes a gush of oil (known as an oil gusher). You can see this happen in this scene from the movie There Will Be Blood:

The related adjective gushing means ‘exaggerated, effusive or overly enthusiastic,’ and is most often used to describe writing or speech. Example: “The moderator heaped gushing praise on the keynote speaker when he introduced her. You can tell that she is his mentor.”

Gush, meaning ‘to rush out forcefully,’ dates back to the mid-14th century. Its origin is uncertain. Some linguists think that it formed by imitation of the sound some fluid gushing out of somewhere makes (like rush), while others think it came into English from a Low German word or from the Old Norse gusa or geysa (to gush or spurt), either of which would mean we can trace it back to the Proto-Indo-European root gheu-, meaning ‘to pour.’ In this case, it would be related to the Greek khein (to pour), khoane (funnel) and khymos (juice), the Latin fundere (to melt, cast or pour out), and the German Gosse (gutter, drain) and gießen (to pour), as well as English words such as alchemy, confuse, fondue, font, found, fuse, geyser, gust, gut, refuse and transfusion. The metaphorical sense, meaning ‘to speak or write effusively about something or someone,’ has been used since the mid-19th century. The noun comes from the verb, and dates back to the late 17th century.

See full definition
Learn more about gush in our forums

Gush in other languages