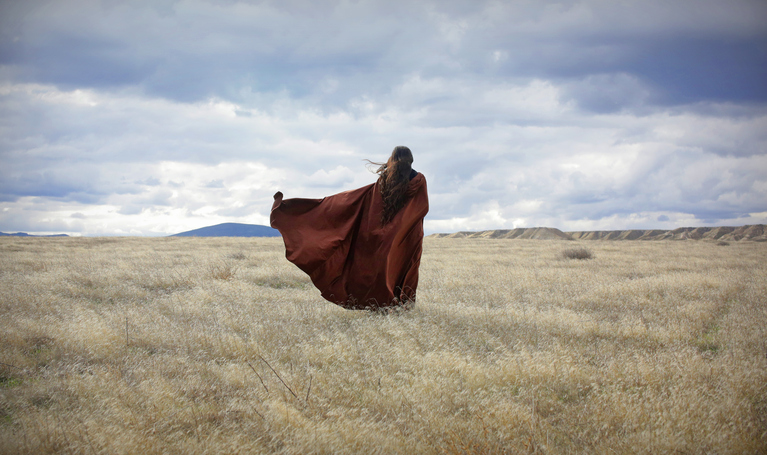 A cloak is a kind of clothing, an outer garment, usually long and loose. Figuratively, anything that covers, disguises, or conceals can be called a cloak. As a verb, to cloak means both ‘to cover with a cloak’ and ‘to hide or disguise.’

cloakroom: a room where outer garments can be left, such as in a nightclub or restaurant. Example: “Before they left the club, they collected their coats from the cloakroom.” In UK English, a cloakroom can also be a room containing a toilet and a washhand basin. You will see it used that way most commonly on real estate agent’s descriptions of properties for sale. You might hear some people say it, but most people are more likely to refer to such a room simply as “the loo” or “the toilet.”

cloak-and-dagger: characteristic of or dealing with secrecy, mystery, or spying. Example: “Clearly Sheila was up to something. She kept whispering to people in corners, but clammed up as soon as Gary came anywhere near her. It was all very cloak-and-dagger.”

Cloak and Dagger are a pair of fictional superheroes from a comic book. You can read more about the comic here. A movie adaptation of the comic has been made. You can see the movie trailer here:

A cloaking device is a fictional or theoretical piece of technology that hides objects, such as spaceships, from view. The term was coined by screenwriter D C Fontana, who used it in a 1968 episode of the science fiction TV show Star Trek. Although cloaking devices that can make something completely invisible don’t exist in real life, there are various technologies already in use to camouflage certain objects, such as stealth aircraft, for example, and scientists are researching ways of obscuring objects. You can read more about cloaking devices here.

Cloak dates back to the late 12th century, when the Old North French noun cloque, meaning ‘a long, loose garment to cover yourself when traveling,’ made its way into Middle English. By the mid-13th century, the spelling had been anglicized as cloke. It can be traced back to the Medieval Latin noun cloca or clocca, which meant ‘bell,’ but also ‘a bell-shaped cape.’ There is some uncertainty about whether the Latin word came from a Celtic word for bell, and was spread by Irish missionaries, or the Celtic word came from Latin. Either way, it first originated as an imitation of the sound. It is related to the Old Irish clocc, the Welsh cloch and the Manx clagg (bell), the Old French cloke and Modern French cloche (bell), and the Middle Dutch clocke and Dutch klok (a clock), as well as the English word clock. The figurative sense of cloak, ‘something that covers or hides,’ or ‘a pretext,’ dates back to the early 16th century. The verb comes from the noun and, meaning ‘to cover with a cloak,’ dates back to around the year 1500. The figurative sense, ‘to cover, hide or conceal,’ dates back to the mid-16th century. The adjective cloak-and-dagger dates back to the mid-19th century (the variant cloak-and-sword appeared in the early 19th century), and is a translation of the French expression de cape et d’epée.

See full definition
Learn more about cloak in our forums

Cloak in other languages