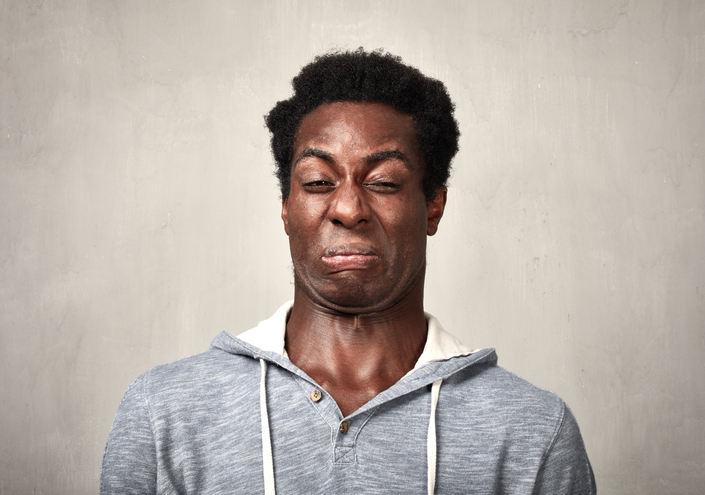 This man is pulling a wry face.

If we are talking about a facial expression, wry means the expression that makes the features temporarily contorted or twisted, often as a sign of displeasure or distaste. It can also mean that something is twisted abnormally, crooked, or turned to one side. When we are talking about words or thoughts, wry means ‘wrong or unsuitable.’ More recently, and now most commonly, wry has come to mean ‘drily humorous or ironic’ or ‘expressing dry humor or irony.’

There was a BBC comedy show in the late 1970s called Scotch and Wry (the title is a play on words, as Scotch and rye are two types of whiskey). You can see a clip from the show here:

The related adverb awry means ‘with a turn, twist, or slant to one side’ or, usually in the expression to go awry, ‘amiss, wrong, not to plan.’ For example, you might say, “The project went awry due to severe technical problems.”

Don’t confuse wry with rye. They are pronounced the same, but rye is a type of cereal used for making flour and whiskey.

Wry, meaning ‘twisted to one side or distorted,’ dates back to the early 16th century. The adjective came from the verb wry, now obsolete, meaning ‘to twist and turn’ or ‘to contort,’ which dates back to before the year 900. The Old English verb wrīgian (Middle English wryen), meaning ‘to turn, bend, move or go,’ can be traced back to the Proto-Germanic root wrig– and the Proto-Indo-European root wreik– (to turn) from wer– (to turn or bend). It is related to the Old Frisian wrigia (to bend), the Middle Low German wrich (turned or twisted), the Greek rhoikos (crooked), and the Lithuanian raišas (lame or limping), as well as English words like wriggle, wrist, worth, wrap, verse, diverge, convert and universe. The figurative sense, used about words and thoughts, first appeared in the late 16th century, and slowly overtook the original meaning, which is now rare except when used about looks, or facial expressions.

See full definition
Learn more about wry in our forums

Wry in other languages