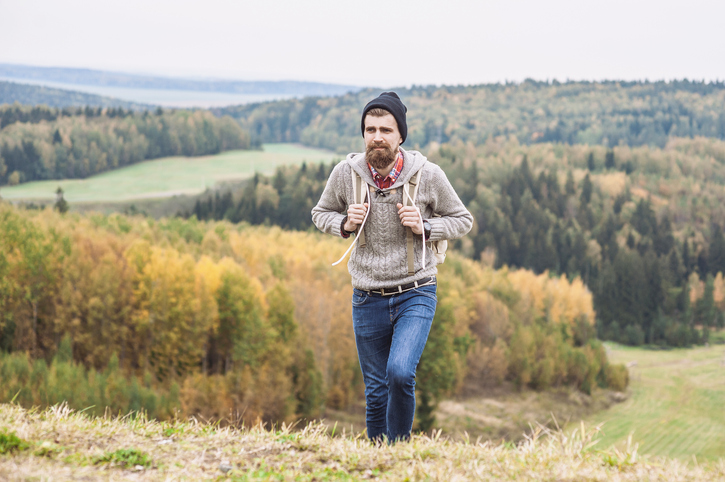 To ramble means to wander aimlessly, for leisure or pleasure, especially in the countryside. If someone talks or writes in a wandering way, usually for a long time and without much order that’s also to ramble. If we are talking about a stream or path, it means ‘to have a course or direction with many turns or windings’ and if plants ramble, it means they grow in a random way. As a noun, a ramble is a leisurely walk, especially one taken in the countryside.

Listen to Led Zeppelin’s song “Ramble On” and read the lyrics here:

In 1932, a protest took place in the Peak District in the county of Derbyshire in England. The people were protesting about ramblers being denied access to areas of open countryside and took the form of a mass trespass on land at Kinder Scout, a moorland plateau in the area. Three groups of ramblers, the largest estimated at 400 people, walked to Kinder Scout from different directions, meeting there at the same time. Violence broke out between some of the ramblers and gamekeepers who were trying to keep them off the land and five ramblers were arrested, some of them later receiving jail sentences. However, the protest raised awareness of the issue and it was the start of a long-running media campaign by the Ramblers’ Association. In 1949, the National Parks and Access to the Countryside Act was passed and, subsequently, several long footpaths were established, including the Pennine Way in the Peak District, which officially opened in 1965. In 2000, the British government passed further legislation, the Countryside and Rights of Way Act, allowing rights to walk on mapped access land. One of the original protesters, Ewan McColl, wrote a folk song entitled “The Manchester Rambler” about the 1932 mass trespass, which you can listen to here:

Don’t confuse ramble with rumble. There is only one letter different in the spelling, but the pronunciation is different. To rumble is to make a deep, rolling, continuous sound and a rumble is the sound itself.

Ramble, as a verb meaning ‘to rove or wander,’ dates back to the mid-15th century, but its origin is uncertain. Some linguists think it may have developed as a frequentative of the Middle English verb romen (nowadays roam), meaning ‘to go or walk,’ perhaps romblen (which appeared a few times in the 14th century). Some speculate that the vowel change was due to the influence of the Middle Dutch rammelen, a variation of the verb rammen (to copulate), which was used to humorously describe ‘the night wanderings of amorous cats.’ The figurative sense, ‘to write or talk incoherently,’ dates back to the mid-17th century. The noun comes from the verb, and dates back to the early 17th century.

See full definition
Learn more about ramble in our forums

Ramble in other languages