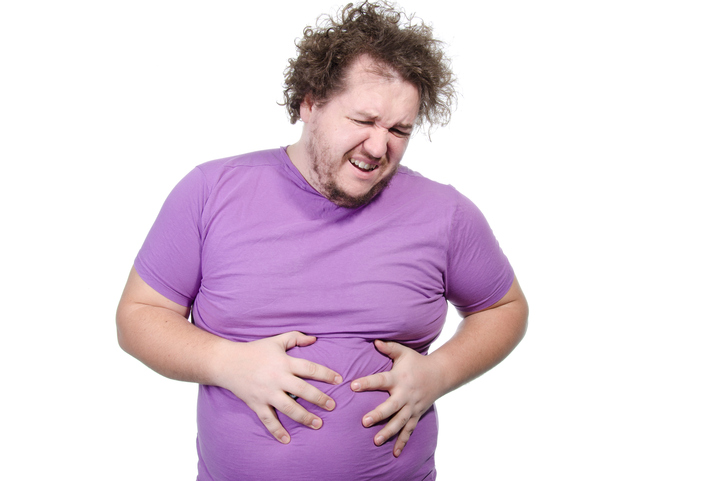 If your stomach bloats, it can be really uncomfortable.

To bloat means ‘to expand or distend’ and also ‘to become swollen.’ Figuratively, to bloat means ‘to make vain or conceited.’ As a noun, in US English, a bloat is a person or thing that is bloated, and figuratively, a wasteful use of space, or a useless person, though the last sense is no longer common. In veterinary medicine, bloat is a disease found in cattle, horses, and sheep.

Some of you may remember from a previous word of the day, flock, that English has lots of interesting words for groups of specific animals. Well, a group of hippopotamuses (or hippopotami) is a bloat. Here is a song by Carrie Newcomer, entitled “A Crash of Rhinoceros,” about Adam and Eve naming the animals:

It contains lots of different group names for animals, including a bloat of hippopotami.

A bloater is a herring cured by being salted and briefly smoked and dried, and to cure a herring in that way is another meaning of the verb to bloat.

Stomach bloating can be very uncomfortable. This video suggests ways you can avoid bloating and a remedy if your stomach is already bloated:

Bloat dates back to the mid-13th century. It was originally the Middle English adjective blout, and meant ‘soft, flabby or flexible.’ Its origin is uncertain, but it is probably from a Scandinavian source, such as the Old Norse bautr (wet or soft), and can possibly be traced back to the Proto-Germanic root blaut- and the Proto-Indo-European root bhleu– (to swell up), an extended form of bhel– (to blow or swell). It is related to many other English words, including ball, balloon, boulder, bowl, fluid, flush, fool and even influence. By the 17th century, the adjective was bloat, and its meaning had evolved to ‘swollen or puffed up.’ The verb first appeared in the early 17th century, meaning ‘to cause to be soft,’ and was originally used to refer to cured fish.The sense expanded, in the mid-17th century, to ‘to cause to swell,’ and it has been used figuratively since the early 18th century. The noun, meaning ‘a worthless person,’ dates back to the mid-19th century. This sense has become dated, but it gave way to the expanded sense of ‘someone or something swollen or bloated,’ as well as the figurative sense ‘a waste of space.’

See full definition
Learn more about bloat in our forums

Bloat in other languages