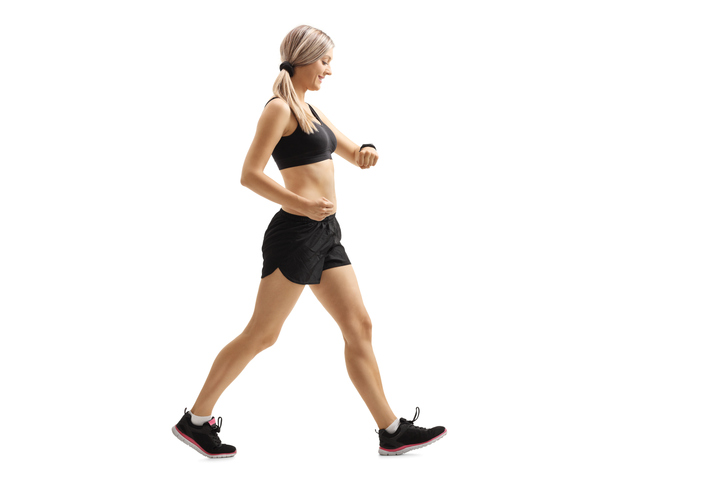 To stride means ‘to walk with long steps’ or ‘to pass over or across something with a big step.’ As a noun, a stride is, of course, a long step and also the distance covered in one stride. Figuratively, a stride is a step forwards towards development or progress. In Australian English, always in the plural form, strides is an informal word for trousers.

hit your stride: to achieve a regular, steady pace. Example: “Karen set off on her morning jog and soon hit her stride.” The expression is also used figuratively to mean that you reach the point or level where you are functioning competently and consistently. Example: “I found this project quite difficult at first, but now I seem to have hit my stride.”

take in stride (US), take in your stride (UK): cope with something well and calmly. Example: “Dan is such a calm person; even when he found out he was going to be made redundant, he just took it in stride.”

Strides are also important movements in the popular urban sport of parkour. This video explains how to perform this movement correctly:

In music, stride or, more fully, stride piano or Harlem stride piano is a jazz piano style. You can read more about it here.

Stride dates back to before the year 900. The Old English verb strīdan (striden in Middle English), originally meant ‘to straddle or mount something’ (usually a horse), can be traced back to the Proto-Germanic stridanan, but its origin before then is uncertain. It is related to the Middle Low German strede (stride or strive), the Old Saxon stridian, the Danish stride and the Swedish strida (to fight), the Dutch strijden, the Old High German stritan and the German streiten (to fight, contend or struggle), the Old Norse adjective striðr (strong, hard, stubborn or severe), as well as the English verb straddle and probably also strive and stride. The sense ‘to walk with long steps’ dates back to around the year 1200, and became the most common use of the verb in Modern English. The noun, meaning ‘a step in walking, or a long step,’ also dates back to before the year 900, as the Old and Middle English stride (one of the rare cases where the spelling has remained the same). It probably came from the verb, but there’s no way to know for sure which came first. Around the year 1300, it also came to mean ‘a measure of distance, around the length of a grown man’s long stride,’ and it has been used to describe the gait of animals, especially horses, since the 17th century. The meaning ‘to stand with the legs wide apart’ dates back to the late 16th century. The figurative sense ‘to advance or make progress’ has been used since the late 16th century, while the expression to take something in (your) stride dates back to the mid-19th century. It was originally literal, used to mean that a horse had not changed gait when coming to a jump or a hedge; its figurative used dates back to around the year 1900. To hit your stride is also a figurative expression that has its origin in horse racing. The jazz sense dates back to the 1930s, in the US.

See full definition
Learn more about stride in our forums

Stride in other languages