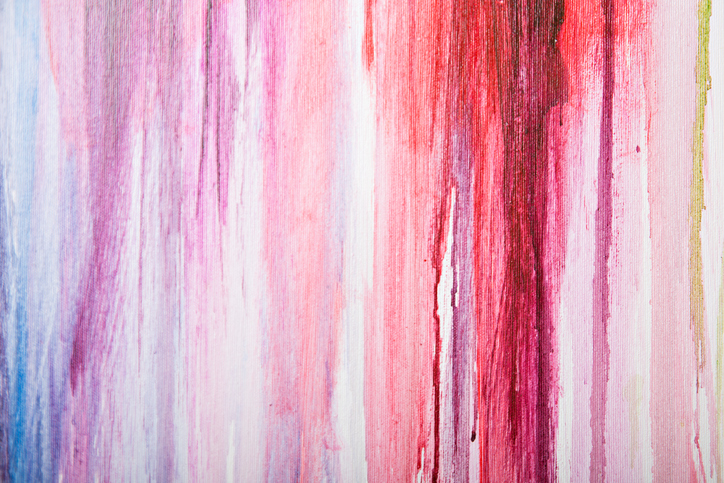 A streak is a long, narrow mark or smear and also a strip, vein, or layer. Figuratively, an element of behavior or personality is also a streak, as are a number of occurrences or a spell. A flash leaving a visible line is a streak as well. As a verb, to streak means ‘to form streaks,’ ‘to lighten or color strands of hair,’ and also ‘to run, work or go quickly.’

To streak also means to run quickly while naked. This usually takes place in a public place, often at sporting events, with the aim of shocking or amusing onlookers. The first recorded incident of streaking took place in 1799, in London, where a young man had accepted a bet to run naked from one district of London to another. Since then, it has gained popularity in many English-speaking countries and was especially prevalent in the 1960s and 70s. You can see some footage of streakers at cricket matches in the 1970s here: (but don’t watch if you are offended by nudity!)

A streak is the act of running quickly while naked.

Colloquially, in Australian English, a streak is also a tall, thin person.

A streak can also be a length of time (or sequence of events) during which something is kept up. It’s often used in sports to mean a run of luck. When a team has a winning (or losing) streak, it means they’ve managed to win (or lose) all their games for a certain period, usually at least three games. Likewise someone who is betting in a casino is often said to be on a winning streak if they repeatedly win, and people often say they’re on a streak of they keep up something they want to do (like go to the gym every day) for a long period of time. On social media, specifically Snapchat, a person will try to maintain a streak by sending at least one image or message to the other (who should send one back) at least once a day.

Streak dates back to before the year 1000. The Old English noun strica (Middle English streke) originally meant ‘a stroke, line or mark,’ in particular ‘the stroke of a pen’ or ‘a line of motion.’ It can be traced back to the Proto-Germanic root strikan-, from the Proto-Indo-European root strig– (to stroke, rub or press). Streak is related to the Middle Dutch streke, the Dutch streek, the Middle Low German streke, the Old High German strich, the German Strich and the Gothic striks (all meaning ‘a stroke or line’), as well as the English words strike and stroke. It is also related to the Old English verb strican (to pass lightly over something), though this verb was lost and is not related to the verbal forms of streak. The sense ‘a long thin mark’ first appeared in the mid-16th century. The figurative sense ‘a run (of luck)’ was first used in the mid-19th century. The verb, meaning ‘to make streaks on something,’ dates back to the late 16th century, while the intransitive form, ‘to become streaked’ appeared in the 19th century. The verb meaning ‘to go quickly, rush or run at full speed’ dates back to the mid-18th century. Its origin is unrelated to the other meanings of streak, but it is thought that streak influenced its change of spelling, since it was originally spelled streek. This form dates back to the mid-13th century, and originally meant ‘to stretch yourself.’ The figurative sense ‘to go quickly’ appeared in the late 14th century. It originated as a Middle English variant of stretch, which dates back to before the year 900 (Old English streccan, Middle English streccen), and can be traced back to the Proto-Germanic strakjanan, which may have come from the Proto-Indo-European root strenk– (‘tight or narrow’ or ‘to pull or twist‘), making it related to the noun string, or the PIE root ster– (stiff), which would mean it is related to the word stern.

See full definition
Learn more about streak in our forums

Streak in other languages