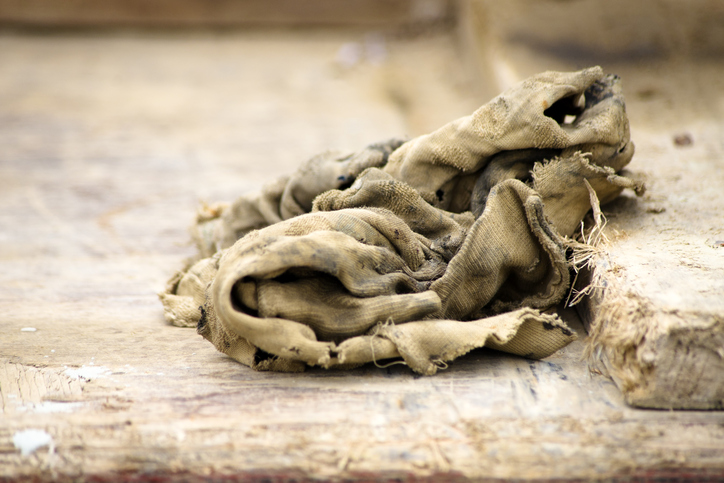 A rag is a piece of cloth, especially one that is old or torn. In its plural form, rags are tattered or torn clothing. Informally, a rag is a newspaper or magazine thought of as being of low or poor quality. As a verb, also informally, it means ‘to scold’ and also ‘to tease,’ although both these senses are now dated.

chew the rag (US): talk, chat. Example: “We spent the afternoon in the bar, chewing the rag.”

from rags to riches: from poverty to wealth. Example: “That entrepreneur was born into a very poor family, but she had a great idea for a business when she left school and went from rags to riches in just a few years.”

lose your rag (UK): get angry. Example: “I’m sorry I spilled your drink; it was an accident. There’s no need to lose your rag!”

on the rag: menstruating. Example: “Can we stop at a drug store? I’m on the rag and I forgot to bring any sanitary pads with me.”

The related adjective ragged can mean ‘in rags’ when talking about clothing, but it can also mean that something is rough or uneven. It is from this latter sense that the musical style ragtime gets its name, because it has a ragged rhythm. The style originated in African-American communities and was very popular at the end of the 19th and beginning of the 20th centuries. You can listen to Scott Joplin’s “The Ragtime Dance” here:

A rag is also a piece of ragtime music.

Rag-and-bone men used to collect unwanted household items, such as old rags, bones, and scrap metal. They would often do this on foot or with a horse and cart. They would then sell the items. Rags could be used for making rag paper (paper made from cotton or used cloth) and bones could be used for making items such as knife handles and metal could be melted down and reused. In the 1960s, there was a BBC sitcom about a pair of rag-and-bone men called Steptoe and Son. You can see a clip from the show here:

The profession of rag-and-bone man gradually died out over the twentieth century, but recently, because scrap metal prices are high, they have started to make a comeback.

Rag dates back to the late 13th century, in the form of the Middle English noun ragge, meaning ‘scrap of cloth.’ Most linguists believe that it came into English from a Scandinavian source, probably the Old Norse rǫgg (shaggy tuft) or the Old Danish rag (rug), though some think there may have been an Old English equivalent, for which the evidence was lost, or that it is a back-formation from the adjective ragged. Whichever the case, it can be traced back to the Proto-Germanic rawa-, from the Proto-Indo-European root reue– (to smash, knock down, tear up or uproot). It is related to the Norwegian and Swedish noun ragg (coarse hair) and the Norwegian dialectal rugga (coarse coverlet), as well as the English word rough. If it came from the Old Danish rag, it is also related to the English rug. It has been used as a pejorative term for a newspaper since the mid-18th century. The expression rags to riches, meaning ‘to rise from poverty to wealth,’ dates back to the late 19th century, while to be on the rag, as a euphemism for menstruation, was first used in the 1940s (rag was used as slang for a sanitary pad in the 1930s). The verb, meaning ‘to scold,’ is unrelated. It dates back to the mid-18th century, and its origin is unknown, though some linguists believe it may have come into English from the dialectal Danish noun rag (grudge). The sense expanded to ‘bully or intimidate’ in the early 19th century.

See full definition
Learn more about rag in our forums

Rag in other languages