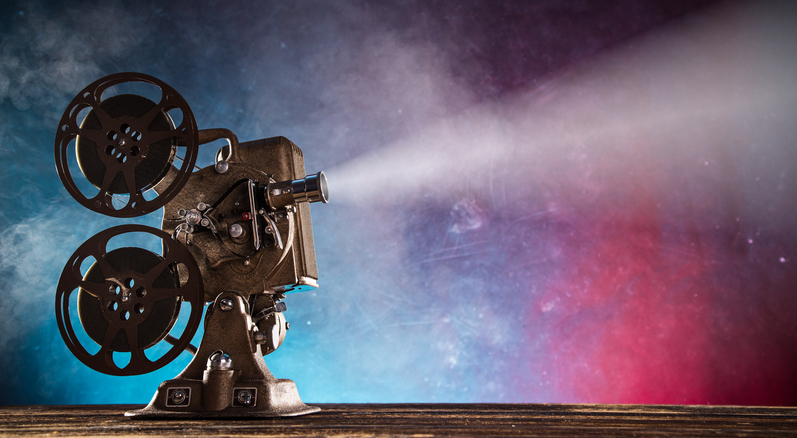 A reel is a cylinder or other device that spins and is used to wind up or let out wire, rope, or film, such as the ones used on fishing rods or kites or movie projectors. The amount of something wound on a reel is also called reel, and the verb to reel means ‘to wind on a reel’ or, followed by either in or out, ‘to pull by winding on a reel.’ To reel also means ‘to move unsteadily or rock’ and also ‘to stagger or walk unsteadily due to drunkness or dizziness,’ or ‘to whirl.’

off the reel (US): immediately, without delay. Example: “We offered Tim the job and he said yes right off the reel.”

reel off: to say, write, or produce quickly. Example: “The author always reels off three pages of work before breakfast.”

The reel is also a traditional Scottish dance, as you can see in this clip from a BBC TV show on the history of dance:

In the world of media, a demo reel is an audio or visual presentation designed to show a potential employer what media skills someone possesses, such as camerawork, editing, etc.

Reel dates back to around the year 1000. The Old English noun hrēol, which had been simplified to rele by Middle English, originally meant ‘a reel for winding thread.’ It can be traced back to the Proto-Germanic hrehulaz and the Proto-Indo-European root krek- (to weave or beat). It is related to the Old English hrægel (garment) and the Old Norse hræll (spindle), as well as the Greek krokus (nap of cloth). The meaning eventually widened to include any type of frame turning on an axis, though it’s mostly used when long, thin material, like thread or film, is wound on it. Reel has also meant ‘a whirl or a whirling motion’ since the mid-16th century. It has been used to refer to the winding part of a fishing rod since the early 18th century, and related to film and other recording media since the late 19th century. The Scottish dance reel has been called that since the late 16th century, and probably evolved from the ‘whirl’ meaning. It has also been used to describe the music for this specific dance since the late 16th century. The verb comes from the noun and, originally meaning ‘to wind on a reel,’ dates back to the late 14th century. The sense ‘to whirl around’ is also from the late 14th century. By the year 1400, the senses ‘to sway, swing or rock,’ ‘to become unsteady’ and ‘to stagger’ (usually because of a blow), had also appeared. It has been used to describe a feeling of the mind reeling (or spinning) since the late 18th century, while reel off (to recite or write without pause) is from the mid-19th century. The verb has been used in the context of fishing since the mid-18th century.

See full definition
Learn more about reel in our forums

Reel in other languages