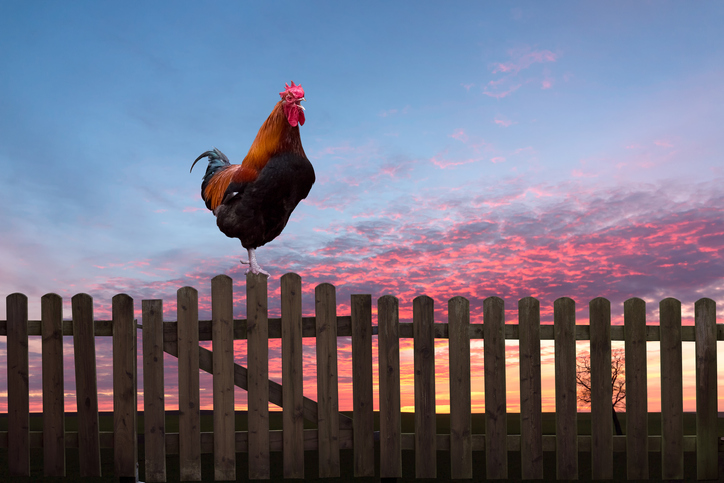 A cock is a male chicken, or generally the male of any bird. You might not hear this so often because, as a slang term, cock means ‘penis,’ and this is why most people in the US say rooster and most people in the UK say cockerel (strictly speaking, a young cock) instead of cock. As a verb, if you cock a gun it means that you draw back the hammer before firing it and if you cock a joint or a limb, that means you bend it. Cock also means ‘to make something stand erect.’

cock of the walk: the leader, the person with undisputed supremacy within a group. Example: “Steve was so cool at school; he was always cock of the walk.”

half-cocked: hasty or haphazard, or hastily or haphazardy. Example: “John’s always coming up with half-cocked ideas to make easy money, but he usually ends up worse off than he started.”

Who Killed Cock Robin is an English nursery rhyme. You can listen to the original rhyme here:

and you can see the Disney animated version of the tale here:

The sound a cock makes when he crows is cock-a-doodle-do.

Although, in many situations, English speakers may try to avoid saying cock when talking about male chickens, in order to avoid any ambiguity, that doesn’t mean we don’t have fun with the play on words at other times, as you can see from this recipe book:

Cock dates back to before the year 900. The Old English noun cocc, which became cok in Middle English, originally just meant ‘the male of domestic fowl.’ Its origin is probably imitative of the rooster’s crow, so its similarity to words meaning rooster in other languages, like the Old French coc, the Modern French coq, the Old Norse kokkr, the Albanian kokosh, the Greek kikkos, the Sanskrit kukkuta and the Malay kukuk, is not due to them having the same roots, but coming from the same bird call. Cock has been used to describe ‘a man who struts like a cock’ since Old English, but this use extended to include ‘pert boy’ by Middle English, and then further to mean ‘man, chap or fellow’ (old cock was quite common as a term of endearment for a friend in the 17th century). Cock was also used as a last name until around the year 1500, but we can still see traces of that use in last names like Hitchcock or Wilcox. The expression cock and bull dates back to the early 17th century, and is probably a reference to one of Aesop’s fables or a similar story, and cock of the walk dates back to the mid-19th century. The use of cock in mechanical senses, like the turn-key of a faucet or a part of a gun, dates back to the early 15th century. Its connection with the older noun meanings of cock is uncertain, but many linguists think that the name may have come from a mild resemblance, and mention the fact that many of the same objects are called Hahn in German (it also means rooster). The part of a gun that prepares it to fire has been called the cock since the mid-16th century, while ‘firing position with the hammer pulled back’ has also been cock since the mid-18th century. Finally, cock has been used as a euphemism for penis since the early 17th century, but pillicock was used for the same purpose since the 14th century (we find traces of it today in the mild UK insult pillock). In Middle English, fide-cok could mean ‘penis’ (fid meant peg or plug). This use is usually explained by the fact that the rooster has often been taken as a symbol of male fertility in many cultures. Some researchers suggest that there may be some influence from the ‘tap‘ sense of cock, but this is unclear. The verb comes from the noun and, meaning ‘to fight,’ dates back to the mid-12th century, and the sense expanded to ‘to swagger’ in the mid-16th century. Both these senses, and the 17th century ‘tilt to one side (like cock your head) come from the rooster sense. To cock, meaning ‘to raise the hammer of a gun, so it is prepared to fire’ dates back to the mid-17th century, and comes from the mechanical sense of the noun. The expression half-cocked dates back to the early 19th century, and is a reference to a gun going off unexpectedly.

See full definition
Learn more about cock in our forums

Cock in other languages