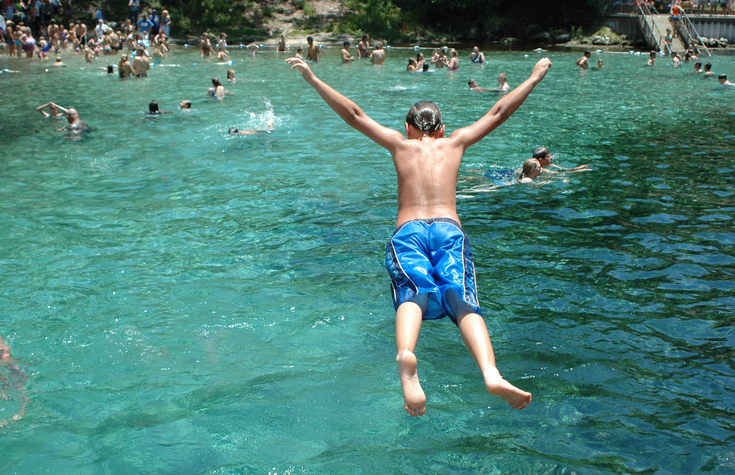 To flop means ‘to drop or fall in a heavy or clumsy way’ or ‘to swing loosely.’ In US English, if someone changes suddenly from one opinion or party to another, that’s also to flop. Informally, to flop means ‘to fail badly.’ Also informally and mainly in US English, to sleep at someone’s house is to flop. As a noun, a flop is the act of flopping, and the sound made by it. Informally, a failure is also a flop and, in US English, so is a place to sleep or stay.

flip-flop: a sudden or unexpected reversal of opinion or policy. Example: “The politican’s flip-flop on this issue took everyone by surprise.” A flip-flop is also a type of sandal, with a thong that goes between the toes, named for the sound it makes as the wearer walks (in Australian English flip-flops are called “thongs”). Example: “We wear flip-flops at the swimming pool.”

belly flop: a dive into water where your body hits the water horizontally. Example: “Tom tried to perform a graceful dive, but only managed a belly flop.”

You can listen to Big Joe Turner singing “Flip, Flop, and Fly” here:

In some varieties of poker the flop is the dealing of the first three community cards or the cards themselves.

Some of you may remember a time when information from computers could be stored on floppies, or floppy disks. They were called that because they were flexible, and made a flopping sound if shaken. The first version of these to come out was large, 8 inches. The next generation was just over 5 inches, and the last type of disk used was 3 1/2 inches. These were encased in rigid plastic, so were no longer flexible, but people still called them floppies.

Flop dates back to around the year 1600. The verb flop was probably just a variant of the verb flap (meaning ‘to shake, beat or dash about,’ ‘to beat your wings’ or ‘to strike or hit’) when it originally emerged in the late 16th century, but it soon separated from flap, and kept the meaning ‘to swing loosely,’ which was originally also one of the senses of flap. The meaning ‘to fall or drop heavily’ dates back to the mid-19th century, and ‘to fail’ first appeared in the early 20th century. The noun, meaning ‘the act of flopping,’ ‘any action that produces a flopping sound,’ and ‘the sound flop’ dates back to the early 19th century, and comes from the verb. The figurative sense ‘a failure’ dates back to the late 19th century (before the verbal sense), and is related to the image of a heavy fall or collapse. Flop, meaning a place to sleep, is a shortened form of flophouse, which was hobo slang for a cheap hotel in the early 20th century.

See full definition
Learn more about flop in our forums

Flop in other languages