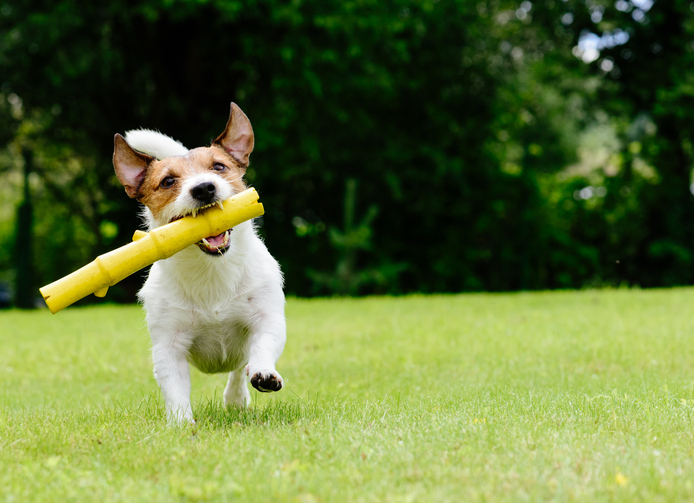 To fetch means ‘to go and get something and bring it back’ or ‘to cause someone to come.’ In financial terms, fetch means ‘to sell for.’ Informally, it can mean ‘to strike or deliver a blow.’ As a noun, fetch is the act of fetching, although this is rarely used. Unrelatedly, a fetch is the apparition of a living person.

fetch and carry: perform menial tasks. Example: “I’ve had enough of fetching and carrying for everyone around here. It’s time you kids learned to help more with the chores!”

fetch up (UK, colloquial): arrive somewhere. Example: “We were trying to get to London, but we got on the wrong train and fetched up in Scotland!”

fetch someone up (colloquial, dated): raise a child or children. Example: “After their parents died, Lindsay had to fetch up her younger sister.”

Fetch is a command you give to a dog when you want it to retrieve something for you and also a game that dogs love to play, where you throw something for them and they bring it back. As you can see in this Doritos commercial though, you should be careful about making the command clear!

Another meaning of fetch, rarely heard now, is ‘to attract, charm, or captivate.’ However, the meaning is still common in the related adjective fetching, which means ‘attractive, charming.” For example, you might say, “You look very fetching in that outfit.”

Fetch dates back to before the year 1000. The Old English verb fecc(e)an (which became fecchen in Middle English), originally meant ‘to bring or bring to,’ or ‘to seek, gain or take.’ It is a variant of the Old English verb fetian or fatian (‘to bring near, bring back or obtain,’ as well as ‘to induce’ or ‘to marry’). Most linguists agree that it can be traced back to the Proto-Germanic fetan, and further back to a Proto-Indo-European verb meaning ‘to walk’ from the root ped (foot). It is related to the Old English root -fat (found in sīthfat, ‘journey’), the Old Frisian fatia (to grasp, seize or contain), the Old Norse feta (to find your way), the Middle Dutch vatten and the Old High German sih faggon (to mount or climb), and the German fassen (to grasp or contain), as well as the Latin pes, pedis, the Greek pos, the Old English fot, the German Fuß (all meaning foot), and the English words foot, expedition, impede, impair, octopus, pawn, pew and tripod, among many others. The sense expanded to include ‘to reach,’ ‘to deliver’ and ‘to effect’ by the 15th century, with ‘to bring in as a price’ first appearing around the year 1600, and ‘to bring back to consciousness’ in the early 17th century. Fetch has been used for the dog’s action since around the year 1600, shortened from the phrase fetch and carry. The noun, meaning ‘the act of fetching,’ dates back to the mid-16th century, and comes from the verb. The unrelated noun fetch, meaning ‘the apparition of a person,’ ‘a specter’ or even ‘your double’ dates back to the late 18th century. Its origin is uncertain, but thought to be from a dialect of English, or possibly Irish.

See full definition
Learn more about fetch in our forums

Fetch in other languages