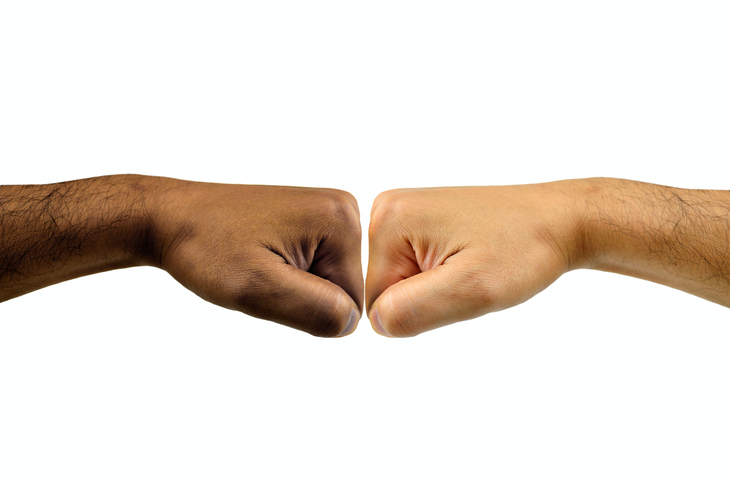 A fist bump is a form of greeting.

To bump means ‘to collide or to come violently into contact with’ and also ‘to cause to collide.’ As an informal term, to bump is to deny a passenger his/her place on a flight or, in US English, to dismiss someone from a position or to take another person’s position. Also informally, to raise or force upwards is to bump, too (in UK English, this is always used with up, but in US English you might also see it without). If a car bumps, it means that it moves with a series of jolts and rather uncomfortable shakings. As a noun, a bump is a collision or the act of colliding, and also a small raised area above a surface, particularly a swelling or raised bruise caused by a blow or collision. Informally, in US English, a bump can mean either a promotion or a demotion, or a raise in salary. A bump or baby bump is also an informal term for a woman’s belly when she is pregnant.

bump into (informal): meet someone unexpectedly. Example: “I just bumped into an old school friend at the store. I hadn’t seen her in over twenty years!”

bump off (slang): kill. Example: “There are rumors that the secret service bumped off the double agent.”

speed bump: a raised strip in the road, designed to slow traffic down.

fist bump: an informal greeting where two people bump their fists together, as in the picture above.

The Mr. Men is a popular series of children’s books which has also been animated for TV. Here you can watch the story of Mr. Bump, who is so named because he keeps bumping into things:

In the UK, it is traditional to give people the bumps on their birthday. This is done by other people lifting the person whose birthday it is up by their arms and legs and boosting them into the air, so that their body flies upwards and comes back down with a bump (the other people are still holding their arms and legs — they don’t hit the ground!). You give the person one bump for every year of their age. You can see someone being given the bumps in this video clip:

(The bumps are normally given to children or young adults; beyond that age, it might get a bit tiring!)

The bump is also a dance, popular in the 1970s. You can see how to do it in this video clip:

Bump dates back to the mid-16th century. The verb originally meant ‘to bulge out,’ and is probably of imitative origin (based on the idea that the original, short-lived sense may have been ‘to hit,’ and the bulging out was caused by a blow), though some researchers think it may also have been influenced by a Scandinavian word. It may also be related with the verb bum (now obsolete), which meant ‘to make a booming noise.’ The sense ‘to strike heavily or come into forceful contact with something’ appeared in the early 17th century. To bump into someone, meaning ‘to meet them by chance,’ was first used in the late 19th century, while to bump someone off, meaning ‘to kill them’ is slang from the early 20th century. The noun comes from the verb and, meaning ‘a protuberance from a blow,’ dates back to the late 16th century. The meaning ‘a dull sounding blow’ dates back to the early 17th century.

See full definition
Learn more about bump in our forums

Bump in other languages