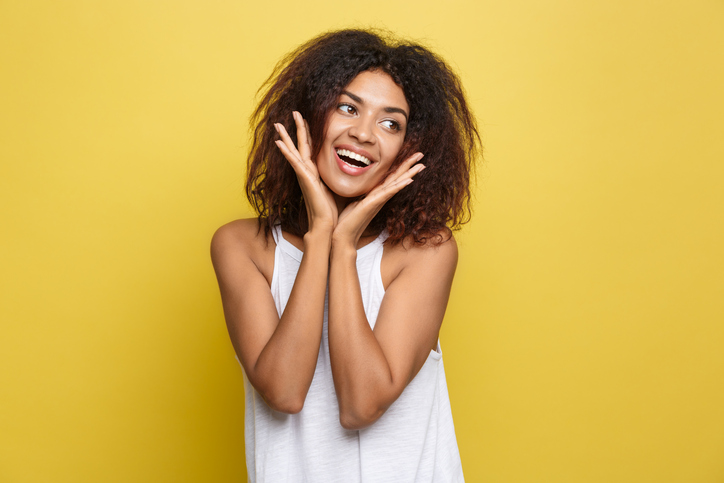 The chin, you might know already, is the lowest part of our face, below the mouth. Did you know that chin is also the verb for a gymnastics exercise? Chin, mostly in the UK, is what you do when you grasp an overhead bar and pull yourself upward until your chin is above or level with the bar—it is often used in the phrase “chin the bar” or reflexively, as “chin yourself.” This is why the exercise itself its called a chin-up, though in most parts of the US, this would be a pull-up. In US slang, rather dated now, to chin also means ‘to talk or chat.’ When you hold a violin to your chin, you can also say you’re chinning.

chin up, keep your chin up: stay cheerful despite difficulties. Example: “I’m sorry to hear your business venture wasn’t a success. Chin up though; things are sure to get better!”

take it on the chin: endure hardship, defeat, punishment, etc. without complaint. Example: “The boss really gave Tim a hard time about losing that client, but Tim took it on the chin.”

chinwag: to chat, mostly UK. Example: “The two old friends were chinwagging all afternoon.” Chinwag is also a noun, meaning ‘a chat.’ Example: “Lucy often invites her neighbor over for a chinwag.”

A cleft chin is a chin with a deep dimple in it (like the one Kirk Douglas had). A double chin is a layer of fat that sags below the chin, creating a wrinkle that makes it look like the person has two chins.

Chin dates back to before the year 1000. The Old and Middle English cin(n) (pronounced chin) originally meant ‘the lower part of the face, below the mouth,’ as it does now, but back then, it was also used for jaw (as in the Old English compound cinbane (jawbone). It is a word that appears in most Germanic languages, and can be traced back to the Proto-Indo-European root genu– (jawbone or joint), which has given many languages words for jaw, chin or cheek, as well as knee. It is related to the Old Saxon and Old High German kinni, the Old Norse kinn, the Dutch kin and the German Kinn (chin) and the Gothic kinnus (cheek), as well as the Latin gena (chin), the Greek génus and gnáthos (jaw), the Old Irish gin (mouth), the Welsh gen (jawbone or chin), and English words like cheek and knee. The expression to take it on the chin literally referred to boxing, and meant ‘to be hit hard,’ but it has been used figuratively as ‘withstanding punishment,’ since the 1920s. To keep your chin up, and chin up date back to the early 20th century. The verb comes from the noun, and dates back to the late 16th century, though the original meaning, ‘to press the face affectionately to someone, chin to chin,’ is now obsolete. The meaning ‘to bring a violin to the chin’ dates back to the mid-19th century, while the slang sense ‘to talk or gossip’ appeared in the US in the late 19th century. The exercise sense is also from the late 19th century.

See full definition
Learn more about chin in our forums

Chin in other languages