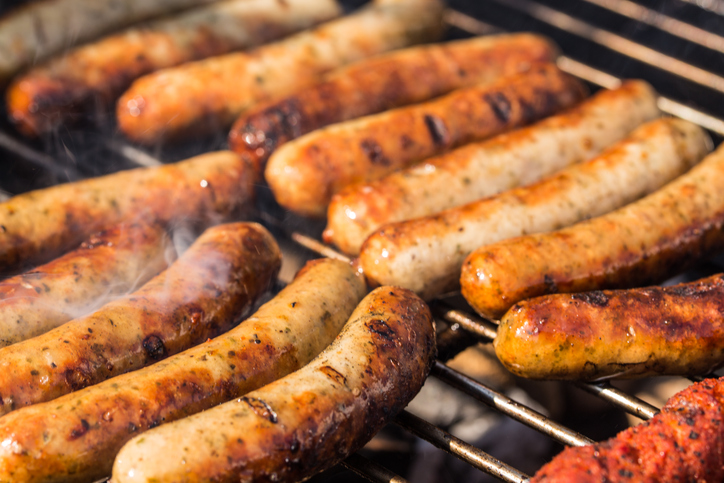 A snag is something sharp that sticks out of something else. A hole or tear in a piece of fabric caused by catching on something that sticks out is called a snag as well and, figuratively, anything that gets in the way, particularly in the way of progress, is a snag. As a verb, related to this last sense, to snag means to impede or get in the way.’ It also means ‘to catch on a snag’ and informally, mainly in US English, ‘to grab or seize.’

Listen out for the lyric “barbed wire love snags my jeans.”

Two early meanings of snag relate to trees. A snag is a short stump that sticks out from the trunk of a tree or from one of the tree’s branches. It is also a tree or part of a tree that has got stuck at the bottom of a river or lake and making it difficult for boats and ships to pass.

In Australian English, a snag is a sausage. You can hear the word used in this song about Australian barbecues (listen for the lyric “Your snags all taste of fried toothpaste”):

Snag dates back to the late 16th century. The noun, which originally meant ‘the stump of a tree or branch,’ came into English from a Scandinavian source, though linguists are unsure which language. It is related to the Old Norse snagi (meaning ‘point or projection’ as well as ‘clothes peg’), snaga (a type of ax) and snag-hyrndr (sharp cornered, with sharp points or protrusions). The sense ‘sharp or jagged projection’ first appeared in the late 16th century (very soon after the word came into English), and has been used for ‘a tree or branch in the water, near the surface,’ especially when it is a danger for boats, since the early 19th century. The figurative sense ‘an obstacle’ came soon after, also in the early 19th century. Snag has been used to mean ‘a tear in cloth or fabric caused by a snag’ since the mid-20th century. The verb, meaning ‘to be caught by an impediment,’ comes from the noun, and dates back to the early 19th century. It was first used in the US in reference to boats being caught on the river, and came to be used about fabric in the mid-20th century. The sense ‘to catch, steal or pick up’ is US slang, and dates back to the late 19th century.

See full definition
Learn more about snag in our forums

Snag in other languages