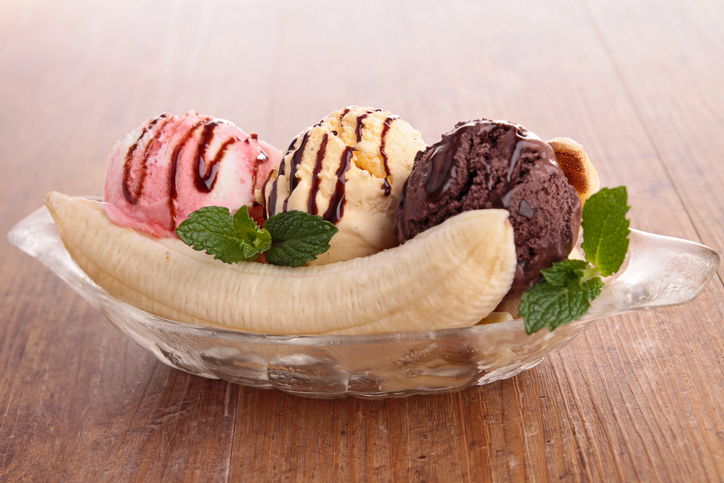 You might know already that split means ‘to divide into separate portions’ or ‘to separate.’ It can also mean ‘to share,’ if you divide something between different people in a group. As a slang term, to split means ‘to leave.’ As a noun, a split is a crack or, in US English, a piece of wood separated by splitting. Split is also a dessert, an ice-cream dish made with a split banana, ice cream, flavored syrup, and chopped nuts (in the UK, this is only used in the combined form “banana split”). As an adjective, split refers to something divided or parted.

split hairs: to make unimportant distinctions. Example: “OK, maybe I should have made it clearer that I was only talking about mainstream 80s music, but you knew what I meant. Stop splitting hairs!”

split up: if you say a couple has split up, that means the two partners have ended their relationship. Example: “Mark and Rachel had grown apart and decided to split up.” You can also just use split in this sense, without up, and a split is the separation. Example: “Sandra and Anne aren’t together anymore, but it was an amicable split and they are still friends.”

In the US, a split is a gymnastic movement where someone separates their legs until they are at right angles to the body. In the UK, people would usually use the plural and a definite article, calling the position the splits. This tutorial shows you some stretches that may help you to achieve the splits:

In the US, to split your vote (or ballot or ticket) is to vote for candidates of more than one political party. Example: “I usually vote Democratic, but this year, I don’t like the party’s candidate for governor, so I might split my vote.”

See full definition
Learn more about split in our forums

Split in other languages