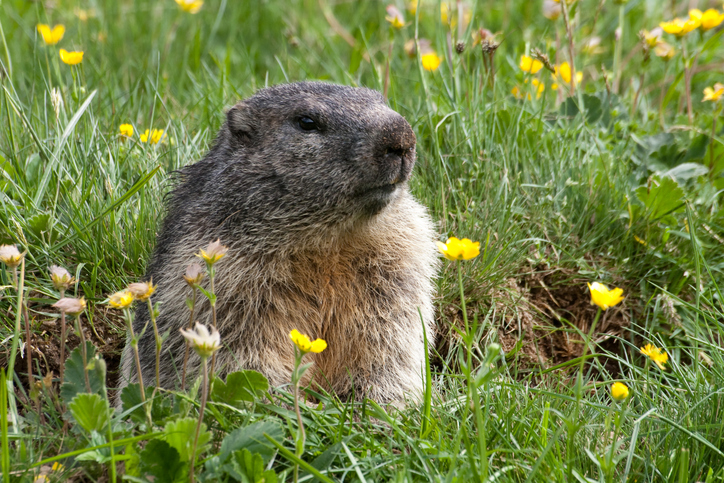 In US English, Chuck is a form of the male given name Charles, but chuck is also a verb that means ‘to toss,’ ‘to throw away’ (sometimes followed by out), or ‘to give up’ (sometimes followed by in). It also means ‘to tap lightly,’ normally under the chin. A chuck is therefore a light tap and also a toss or pitch. Talking about food, chuck is the cut of beef between the neck and the shoulder blade and, in some dialects, chuck can mean ‘food or provisions’ in general. In Canadian slang, chuck means ‘water’ or any body of water, such as lakes or oceans.

chuck up (or: upchuck): to vomit. Example: “I think I must have eaten something bad. I’ve been chucking up all night.”

A woodchuck is a type of rodent also known as a groundhog. Groundhog Day is the title of a 1993 movie and you can see the trailer for it here:

Chuck is also a term of affection. It is actually the oldest use of chuck, and it is unrelated to the other senses. It was a variant of cluck (the sound chickens make) in Middle English before it was used as a term of affection. These days it is mainly heard in Liverpool, in North West England.

A woodchuck also features in an English tongue twister. You can listen to and practice it here:

Chuck first appeared in English in the mid-14th century, as the Middle English chuk, and was a variant of cluck. In this sense, it was used both as a noun and a verb, and its origin is thought to be an imitation of the sound chickens make. It started to be used colloquially as a term of endearment almost immediately, but both these senses have fallen out of used (though you may still hear it as a term of affection in some regions of England). Chuck, as a verb meaning ‘to give a light blow under the chin,’ dates back to the late 16th century. It emerged as a variant of chock, but beyond that, its origin is uncertain. Many linguists believe that it came from the Middle French choquer (to attack), which can be traced back to Germanic source, possibly Frankish, where it was probably imitative. This would mean it is related to the Middle Dutch schokken (to push or jolt) and the Old High German scoc (a jolt or swing), as well as the English word shock. Chuck, as a noun originally meaning ‘a piece of wood,’ dates back to the mid- to late 17th century. It is also a variant of chock, but it is not related to the other senses. It probably came into English from the Old North French noun choque (a block) from the Old French çoche (log) and the Gaulish tsukka (a tree trunk or stump). It is related to the French souche (a stump, stock or block). The sense ‘a cut of meat’ (usually from the shoulder) was first used in the early 18th century, and this sense colloquially expanded to mean all food in the mid-19th century. Finally, chuck, as a Canadian slang word for a body of water, is unrelated. It dates back to the mid-19th century, and comes from the Nootka word for water, č’aak, probably reinforced by the Lower Chinook word for water, ł-čuq.

See full definition
Learn more about chuck in our forums

Chuck in other languages