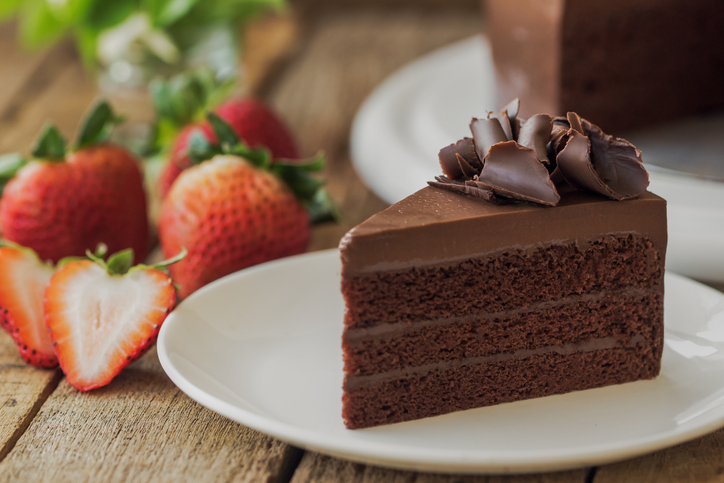 We’re sure you know that a cake is a breadlike, sweet, baked food, popular at birthday parties and weddings. However, any other food shaped or molded as a mass, can also be a cake and, in general, a shaped block of something, like soap for example, too. Did you know that cake is also a verb? It means ‘to form into a dry layer or crust on the outside’ or ‘to encrust or cover thickly.’

have your cake and eat it (too): have the benefits of something with none of the disadvantages. Example: “Tessa wants to leave her golf club, so she won’t have to pay the fees anymore, but she wants to retain access to the course. Well, she can’t have her cake and eat it.”

take the cake (mainly US): to be an outstanding example, rank first (often used ironically). Example: “Your arrogance really takes the cake.” (In UK English, the expression “take the biscuit” is more common.)

piece of cake: something really easy. Example: “I was dreading that exam, but in the end, it was a piece of cake.”

Regular readers of Word of Day may have realized that we quite like cake. A basic cake is fairly easy to make, so here is a recipe for one. (This recipe has been tried and tested by two members of the Word of the Day team, who found it delicious.)

Cake dates back to the early 13th century. The Middle English cake comes from the Old Norse kaka, and eventually replaced the Old English word for ‘a flat, relatively thin mass of baked dough,’ coecel (kechek), though they are related. Coecel actually existed for a brief period in Middle English, written kechel, but it was used to mean ‘little cake.’ The Old Norse kaka can be traced back to the West Germanic root kokon-, but its origin before then is unknown. For a long time, linguists believed it was related to the Latin coquere (to cook), but now it is considered unlikely. Cake is related to the Middle Dutch koke and the Dutch koek (‘cake,’ ‘gingerbread’ or ‘dumpling’), the Old High German huohho and the German Kuchen (cake or tart), as well as the English word cookie. The sense extended to any flat, rounded mass in the mid-15th century, and at the same time, the sense for the type of cake you eat narrowed to ‘a light, sweet, baked dough in any shape.’ To take the cake, meaning to rank first, dates back to the mid-19th century in American English, while people started calling something easy a piece of cake in the 1930s. The verb, meaning ‘to form into a cake,’ comes from the verb, and dates back to around the year 1600. The transitive sense, ‘to take the shape of a cake,’ appeared shortly after.

See full definition
Learn more about cake in our forums

Cake in other languages