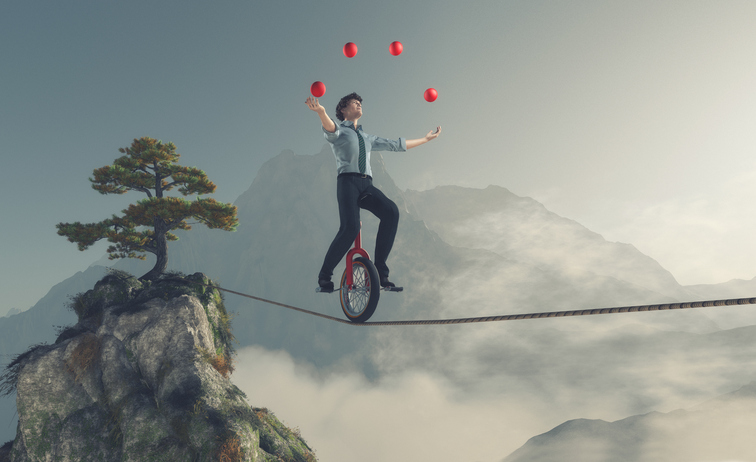 If you keep several objects, usually balls, but also plates, knives, or anything else, in continuous motion in the air at the same time by tossing and catching them, then you’re juggling. If you almost drop something, but you manage to catch it again, you’re juggling too. ‘To alter or manipulate accounts or figures in order to deceive someone’ is also to juggle. Figuratively, when you deal with two or more activities at the same time and you switch rapidly from one to the other, you’re juggling. As a noun, a juggle is the act of juggling.

Juggling has always been popular as a form of entertainment. This video clip gives a brief glimpse of a jugglers’ convention in the US in the 1950s:

Although juggling normally involves throwing objects into the air and catching them again, another form of juggling is contact juggling, in which the objects are in constant motion, but also in constant contact with the juggler’s body. You can see it being done here:

Juggle dates back to the late 14th century, as the Middle English verb jog(e)len. It came about in English as a back-formation from the word juggler, which had existed in English since around the year 1100, and came from the Anglo-French jogelour and the Old French jogleor. It was probably also influenced by the Old French verb jogler (to serve as a jester or buffoon). Both juggle and juggler can be traced back to the Late Latin verb joculāre, from the Latin ioculārī (to joke or jest), and the Proto-Indo-European root yek– (to speak). It is related to the French jongler and the Italian giocolare, as well as the French jeu, the Spanish juego, the Portuguese jogo and the Italian gioco (all meaning ‘game’), and the English words joke, jest and jocular. Juggle originally meant ‘to entertain by clowning or conjuring tricks,’ and the sense ‘to deceive someone’ first appeared around the year 1400, but the meaning narrowed to ‘tricks of manual dexterity’ in the mid-15th century. Juggle has been used figuratively, of tasks or careers, since the 1940s. The noun comes from the verb, and first appeared early 15th century.

See full definition
Learn more about juggle in our forums

Juggle in other languages