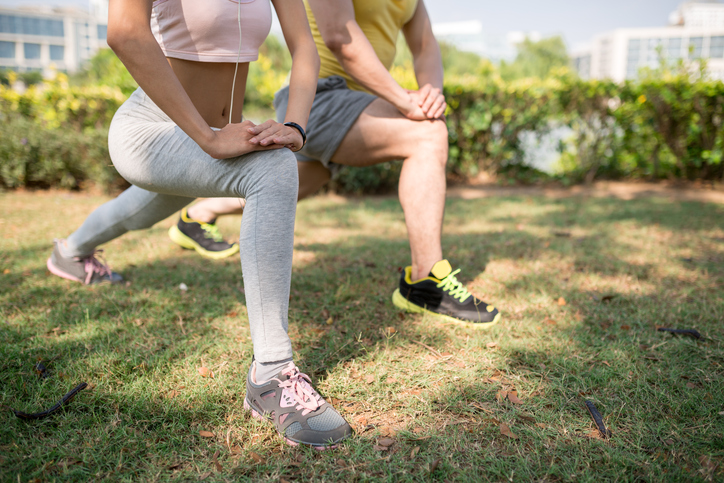 A lunge is a sudden forward thrust, with a sword or knife, or any sudden forward movement. As a verb, to lunge means ‘to move with a sudden thrust’ or ‘to thrust forward’. Additionally, a lunge (or: lunge line, lunge rein, lunge lead) is a rope used in training or exercising a horse and the verb to lunge means ‘to train a horse with such rope.’ In US English, these latter senses are more usually spelled longe.

A lunge is also an exercise where you step forward with your front leg bent while you keep your back leg straight. In this clip from the sitcom Friends, you can see Joey doing some lunges while wearing all of Chandler’s clothes:

When Joey says he is “going commando,” it means that the one thing he is not wearing is underpants. The origins of this expression are unknown. It has existed since at least the late 1960s, but has become more commonly used since this episode of Friends was shown in 1996.

The noun lunge, meaning ‘a thrust,’  dates back to the early 18th century. It was originally a fencing term, and specifically meant ‘to thrust with a sword,’ and came into English from the French. It used to be spelled longe, as it was shortened from allonge, from the French allonger (to extend or thrust). It can be traced back to the Vulgar Latin allongāre and the Late Latin ēlongāre (to lengthen), and longus (long or extended), from the Proto-Indo-European root del- (long). It is related to English words like long, elongate and longitude, as well as the Old Frisian and Old Saxon lang, the Old High German and German lang, the Old Norse langr, the Middle Dutch lanc, the Dutch lang and the Gothic laggs, the Old Persian darga-, the Persian dirang and the Sanskrit dirghah (all meaning ‘long’), not to mention all the Romance language words derived from the Latin. The verb comes from the noun, and also dates back to the early 18th century. Like the noun, it originally meant ‘to thrust with a sword.’ The sense ‘to make a sudden forward rush’ first appeared in the early 19th century. The exercise is based on the fencing move, and became popular in the 20th century. The noun lunge or longe, meaning ‘a rope to exercise a horse,’ and the related verb, date back to the late 16th century. Most linguists believe that it came from Latin longa (the feminine form of longus), which was used in France with the same meaning as longe or lunge. A few, however, think that it came from the French allonger, making it related to the other senses of the word.

See full definition
Learn more about lunge in our forums

Lunge in other languages

Intermediate+ Word of the Day: scale