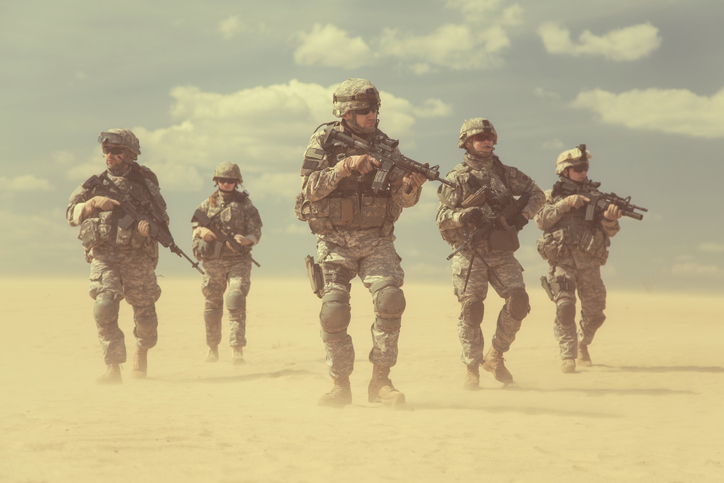 To deploy is a term used in the military to mean ‘to spread out troops so as to form an extended front or line’ and also ‘to arrange things so that they’re ready to be used’ and also ‘to come into a position ready for use.’ Although this is mostly used as a military term, it is sometimes used figuratively in everyday language, mostly related to sales, resources, or strategies.

deployment fever (military slang): when a soldier starts to get frustrated at being deployed away from his/her family for a long time.

deployment baby (military slang): a baby born while his/her father is deployed away from home.

Listen out for the lyric “We will deploy our army.”

Deploy is one of several words in English built around the root ploy, which comes from Latin, via French, where it has the meaning of ‘bend,’ or ‘fold.’

Deploy was first used in the late 15th century, and was borrowed from the French verb déployer (to unroll or unfold), from the Old French desploiier, and can be traced back to the Latin verb displicāre (to unfold or scatter). In Latin, it was formed adding the prefix dis– (which is used to add the sense of ‘not, lack of,’ ‘the opposite of’ or ‘apart, away’ to many words) to the verb plicāre (to fold). The latter part can be traced back to the Proto-Indo-European root plek-. Deploy is related to many other words in English, including ploy, as you read above, which means ‘a tactic, strategy or gimmick,’ and employ, which now means ‘to use’ or ‘to give work to,’ but also implicate, imply, apply, complicate, duplicate, multiply, perplex, plait, pliable, ply and replicate. Its more specific, military meaning dates back to the late 18th century, and has become the most common use.

See full definition
Learn more about deploy in our forums

Deploy in other languages

Word of the Day: gobble