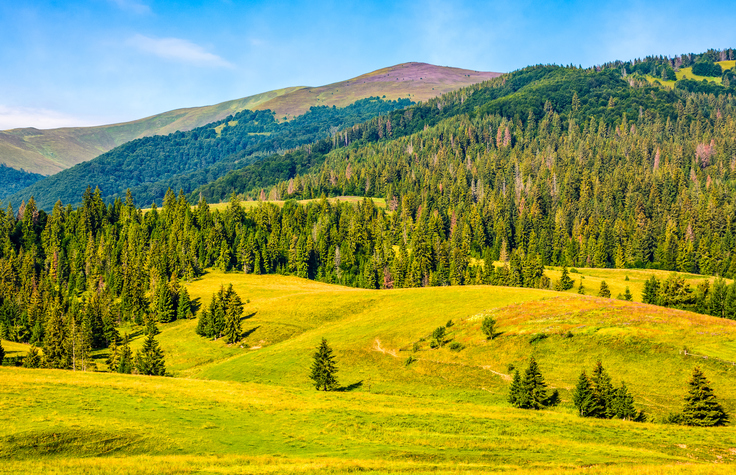 A spruce is a type of tree from the pine family with short, angled, needle-shaped leaves, and also the wood taken from it. As an adjective, spruce means ‘made from the wood of these trees.’ However, spruce, as an adjective, has another meaning, ‘tidy or trim in appearance,’ and the related verb, usually followed by up, means ‘to make tidy or smart.’

The Spruces and the Pines is a comedy about two feuding families who run rival Christmas tree farms. You can see the trailer for the movie here:

You may sometimes see spruce written with a capital “S,” especially in older texts. This is because the tree takes its name from an old name for its area of origin, Prussia, which was once also known as Spruce or Spruce-land. If you want to know more about Prussia, you can read about its history here.

Spruce, the name of a fir tree, dates back to the mid-17th century. It evolved from the adjective spruce, which meant ‘made of spruce wood,’ and had been used since the early 15th century. It, in turn, came from the Spruce or Sprws, a 14th century variation on the French Pruce, for Prussia. It was originally used to mean any type of wood brought from Prussia, but became the name of a particular species of evergreen in the early 18th century. The adjective spruce, meaning ‘neat,’ ‘smart in appearance’ or ‘dapper’ is a bit older; it dates back to the late 16th century. It can also be traced back to Prussia, though that is where the relation ends. Spruce, in this sense, derived from sprucer-leather or spruce-jerkin, which meant ‘jerkin made of leather imported from Prussia,’ considered to be particularly fine. In the 15th to 17th centuries, goods from Prussia were considered luxuries, so the name became a stand-in for anything considered to be particularly fine. The verb, meaning ‘to make dapper or neat’ also dates back to the late 16th century, and comes from the adjective.

See full definition
Learn more about spruce in our forums

Spruce in other languages